Alain Macklovitch was 13 when he scratched his first record. The year was 1995, the turntable was his father’s, and the mixer… well, he didn’t have a mixer yet. But that problem was remedied soon enough, when he used his freshly earned Bar Mitzvah money to buy himself a used Technics 1200 turntable and, you guessed it, a mixer. In the months that followed, while the other kids were busy playing sports and watching Full House, he spent most of his after-school time locked up in his basement, practicing, listening to Pete Rock, DJ Premier and Jazzy Jeff records, studying videotapes and showing his new scratches to his big brother Dave.

Two years later, with nary an armpit hair in sight, the Montreal native was crowned DMC World Champion and invited to be an honorary member of the Invisibl Skratch Piklz, the celebrated Bay Area crew led by DJ Q-Bert and Mixmaster Mike. When that crew disbanded, he and Miami’s DJ Craze joined forces as the front men of a new collective, the Allies. In the years that followed, A-Trak went on to win the 1999 & 2000 ITF World Championships, the 1999 Vestax World Extravaganza and the 2000 DMC Team Championships (with Craze). On top of being the youngest world champion, this made him the first DJ ever to win all three major titles (DMC, ITF and Vestax) and the first DJ to win five world championships. At the age of 18, Young Trizzle decided it was time to retire from battling.

In the turntablist scene, A-Trak established himself as “the DJ’s DJ”, building groundbreaking routines that managed to push the envelope technically while remaining appealing to the untrained ear. He developed a revolutionary notation system, which allowed him to write scores of scratch patterns and solos. And his DJ battle records quickly became cult favorites, used and abused in competitions around the globe. Meanwhile, with his broski Dave 1 (now of Chromeo fame), he formed the indie hip hop label Audio Research, which built a steady reputation for putting out critically acclaimed vinyl releases. A-Trak has also collaborated with Peanut Butter Wolf’s Stones Throw imprint, producing a 7-inch which was later included on the Jukebox 45s compilation.

From 1998 on, he toured constantly across the world, criss-crossing North America and Europe repeatedly, hitting Japan five times and Australia every summer. He has performed in such far reaches as mainland China, Iceland, South Africa and Hawaii. To this day, you can catch him wowing audiences at Coachella, the Red Bull Music Academy, Audiotistic or the Montreal Jazz Fest one day, and then tearing up the grimiest hip hop club the next.

A-Trak’s live sets bridge the gap between boundary-pushing turntablism and debauched party-rocking. He hits you with jaw-dropping DJ routines, using a sampler and effect pedals for live production. But at the same time, he keeps people cutting up the rug with eclectic sets of bootleg-heavy hip hop, crunk, booty and classic electro, dancehall, 80’s funk and anything in between. Plus he tops it all off with his signature comedic comments on the mic.

In the summer of 2004, Kanye West caught A-Trak performing at a record store in London and quickly invited him to become his DJ. They embarked on a 40-city North American tour, performing in front of sold-out 20,000 seat stadiums for two months, and then hit Europe and Japan. When Kanye came home to hit the lab, he reached out to Trizzy for some cuts on Common’s critically praised album Be as well as his sophomore opus Late Registration. They are currently back on the road promoting this instant classic.

All of A-Trak’s worldwide advenctures have been captured on video and are compiled on his DVD entitled Sunglasses Is A Must, to be released in early 2006. He is also in the midst of recording his first album, which will showcase his distinctive style of scratch-based and sample-heavy production as well as cameos from some of his favorite emcees, from the Dipset to MF Doom. A-Trak is one of the only DJs to truly reconcile technical experimentation with cold getting dumb on the dancefloor. And by all accounts, the best has yet to come. 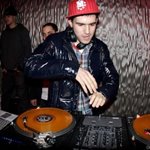