A F I Bio - Biography

"Crash Love is certainly not a concept album or rock opera by any stretch, but the songs are generally connected by a greater theme... The album title itself can be construed as a command, as a destructive kind of love, or as a desire for a relationship that's heading inevitably toward disaster or flameout. The lyrics of some songs trace an arc from adoration to the desire to tear down the object of affection. These songs are written from perspectives both sympathetic and critical, as well from both the inside the relationship and outside."--Davey Havok

Crash Love, AFI's eighth full length studio album, due out September 29 on DGC/Interscope, is indeed informed not only by the ever-evolving chemistry between the musicians in the band but also by the members' personal lives and perhaps most of all by the always intense relationship between AFI and its fans. The latter has intensified considerably over the most recent of AFI's 18 years as a band, with 2006's decemberunderground entering the chart at #1 with first week sales of nearly 200,000 and subsequent sold out shows at the Long Beach Arena and Bill Graham Civic as well as appearances on Saturday Night Live and at Live Earth--not to mention 2003's Sing The Sorrow going platinum. These experiences were bound to have an impact on four kids from Ukiah, California who formed a rudimentary punk band in 1991 with aspirations of playing in the SF Bay Area and possibly releasing a few singles and an LP or two.

"The record is really more about how the great attraction to inappropriately shared intimacies, carefully constructed personas, and the loss of a sense of self can affect an entire world," Havok explains. "As well as how this loss of self is sought after rather than resisted... With today's media, we have such quick and pervasive access to the trivia of anyone's lives. Everything is intensified and indulged, this desire and ability to know everything you possibly can about anyone, from what thread-count bedsheets they sleep in to whether or not they believe in ghosts."

While Crash Love is the first AFI record to feature such prevalent sociopolitical and observational perspectives, the darkly personal AFI lyrical strain is distinctly present on standout tracks like "Medicate" and its stark portrait of a user/enabler relationship, as well as throughout the ill fated death ride scenario of "End Transmission." Elsewhere, the newer approach shines on the self-explanatory "Darling I Want To Destroy You," "Veronica Sawyer Smokes" with couples Jade Puget's Smiths-esque guitar signatures with a tale of heartbreak brought on by disappointment with a teen idol, "Beautiful Thieves" with its privileged characters whose actions carry no consequences, and "Too Shy To Scream" which sets yearning, distanced adorations against the backdrop of a drumline-inspired shuffle propelled by Hunter Burgan's bass and Adam Carson's drumming.

Crash Love, it has to be said, features AFI's Puget, Burgan and Carson playing at their most focused and direct. Where Sing The Sorrow and decemberunderground saw the band's compositions increasingly steeped in atmospherics that created a moody-heavy realm that often threatened to engulf the songs, Crash Love is, according to Carson, "the sound of the four of us playing in the same room. It's by no means stripped down but you really hear the band. Sing The Sorrow--and to certain extent decemberunderground--gave us our first experience with big budget recording, which led to some really dense arrangements, electronics, overdubs and so on. Not that there's anything wrong with that, but this time we came in with 14 songs we were playing really well and wanted to capture that energy."

Having entered the studio with fully formed and woodshedded songs, Puget and Burgan were freed to come up with novel approaches to each of their instruments--reducing their dependence on strings, keys and other embellishments both organic and electronic. Following a writing process that Puget recalls taking "the better part of a year," the band convened in late 2008 with producers Joe McGrath and Jacknife Lee to begin work in earnest on what would become Crash Love. "We don't jam," Puget explains. "But we had the material so completely formed by the time we began recording that we were able to do things more on the fly this time, to concentrate on sounds as well as performance, to contribute anything that worked, that made a sound that was interesting. So we ended up with sort of a 'Shabby Chic' recording aesthetic: The sounds we came up with separately could be really rough and abrasive but assembled together they created an end result that was really beautiful."

Carson adds, "Personally I'm more interested in the way AC/DC sounds big: Tones that are really big but don't necessarily need a stadium, that sound just as big in an 800 capacity club."

Carson speaks from experience. Having co-founded AFI with Havok in 1991, he's seen his share of clubs that size and considerably smaller.

Within a year of forming, the original AFI lineup pressed up about 200 copies of the split 7-inch Dork with fellow Ukiah High students Loose Change (of which future AFI guitarist Puget was a member). A smattering of singles, EPs and compilation tracks followed, as did the early AFI albums Answer That And Stay Fashionable (Wingnut, 1995) and Very Proud of Ya (Nitro, 1996), all showcasing a youthfully exuberant, often sophomoric East Bay hardcore punk style that began to cultivate a following as the band hit the road, playing virtually anywhere in the world that would have them.

The first hints of AFI's more diverse and mature current direction would appear on the band's third album and first to feature Burgan on bass, Shut Your Mouth And Open Your Eyes (Nitro, 1997) and the subsequent A Fire Inside EP (Adeline, 1998). It would be one more year, however, until the present AFI lineup and sound would truly coalesce with the addition of guitarist Puget and the release of fourth album Black Sails In The Sunset and the All Hallows EP (both Nitro, 1999). Another year later, fifth album The Art of Drowning (Nitro, 2000) would provide a breakthrough, as the fully realized and unmistakable AFI sound already having built a following in the hundreds of thousands, would receive its first taste of mainstream exposure as that record's "Days Of The Phoenix" found its way onto modern rock playlists.

With sixth album Sing The Sorrow (Dreamworks, 2003), AFI made an exceedingly ambitious leap forward, enlisting co-producers the late Jerry Finn and Butch Vig and expanding their musical palette in all directions: First single "Girl's Not Grey" represented the band's most infectious "pop" moment up to that point and became a bona fide hit, while live favorite "Death Of Seasons" incorporated pounding industrial rhythms and mournful choruses before dissolving into a cacophony of screaming anguish. Elsewhere on the record, "Silver And Cold" provided bittersweet balladic verses that exploded into an irresistible chorus, while "Leaving Song Part 2" and "Dancing Through Sunday" showed the familiar AFI chant-along choruses to be as fierce and frantic as ever, even while couched in increasingly sophisticated musicianship.

As with AFI's previous surges forward, their dedicated legions of fans made the leap with them as new ones joined in droves: Sing The Sorrow sold in excess of one million copies in the U.S. and "Girl's Not Grey" won the 2003 MTV2 Viewers Choice award. Critics joined in for the first time as well, with best of 2003 accolades awarded by the likes of the NEW YORK TIMES, USA TODAY, GUITAR WORLD, SPIN and REVOLVER, as well as from longtime supporters ALTERNATIVE PRESS.

"I was completely in awe then and still am now," Burgan recalls. "It all seemed to have come naturally from our efforts and honestly that's really hard for me to comprehend."

The band was stunned yet again when the sixth AFI album, decemberunderground (Interscope, 2006), released on 6-6-06, stormed into the U.S. album chart at #1, selling 182,000 in its first week and unseating the Dixie Chicks from their multiple week perch atop the charts. Also produced by the late, lamented Finn, decemberunderground yielded the band's biggest anthem to date, "Miss Murder," which went on to be named #7 in ENTERTAINMENT WEEKLY's 10 best songs of 2006 and #15 in ROLLING STONE's 100 best songs of the year. Other decemberunderground tracks that instantly assumed fan classic status alongside longtime AFI fan favorites included the frigidly beautiful "Love Like Winter," the hyper aggressive "Kill Caustic," and the infectiously melodic "Summer Shudder" and "The Missing Frame." decemberunderground went on to sell over a million copies, providing AFI with its second consecutive platinum album, as the band sold out venues on the level of California's Long Beach Arena and San Francisco's Bill Graham Civic Center, made its debut appearance on SATURDAY NIGHT LIVE, and played the New Jersey installation of 2007's Live Earth festival.

The members of AFI readily acknowledge the debt their success story owes to their fiercely local following, The Despair Faction. AFI and The Despair Faction have long enjoyed an intimate relationship that goes beyond more conventional fan club perks such as exclusive merchandise and ticket pre-sales to soundcheck parties regularly organized and attended by DF members who come bearing gifts ranging from homemade AFI artwork, clothing and other keepsakes to vegan baked goods for Havok and Burgan. "They're not really a fan club per se," says Puget. "The Despair Faction was conceived to be more interactive than that, to have more of a direct connection with us."

This connection was inverted and intensified with the Begin Transmission experiment that took place during the recording of Crash Love. AFI solicited videos from the band's fans, each giving a glimpse into the life of the video's maker, with the understanding that a handful of entrants would be chosen to contribute backing vocals to the new record. Havok, Carson, Burgan and Puget personally went through over a thousand entries, ultimately choosing six winners who were then notified in person by longtime AFI tour manager Smith Puget and flown to Los Angeles to guest on Crash Love (where they can be heard prominently on the "Flash Flash Car Crash" refrains of "I'm Trying Very Hard To Be Here," for example). Honorable mention runners-up each received handmade Valentine's Day cards from members of AFI.

"We turned the dynamic around," says Burgan, who was voted Top Music Twitterer in this year's Shorty Awards. "We looked into the lives of the fans. Real people doing real things. It was very interesting to see who's out there, what they're feeling and what they're doing with their lives. They already know who we are, so it was good to get to know them for a change."

Carson adds, "The idea was to engage the fans and make them a part of the process. I didn't expect to be so floored by the effort that went into these kids' videos of their lives. It was a great state of the union, so to speak. And we came away from it feeling that much more of a bond with them."

If the quality of Crash Love is any indication, that bond will only continue to intensify. "I am so proud of this record," Havok concludes. "I really believe it's the best AFI record. It honestly feels like we've made our first truly timeless record. We didn't set out to do that--you can't set out to do something like that--but it definitely feels like that's what we've achieved: created the album by which we'll be remembered."

A F I Photos 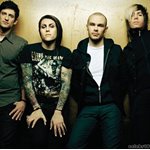