A Band Of Bees Bio - Biography

Two years isn’t exactly an eternity, yet somehow the perception has bedded down that A Band of Bees’ Paul Butler and Aaron Fletcher have been away for longer than was strictly necessary – as if, after releasing their lauded, Mercury Prize-nominated debut album, Sunshine Hit Me, in 2002, the Isle of Wighters mumbled, “We are going out for a walk, we may be some time.” And duly disappeared.

Granted, time does seem to tick a tad differently on the island, which is just one of its many attractions for a band who are fiercely proud – and protective – of their roots. Now, though, with two years of almost solid touring and three fecund weeks at Abbey Road studios behind them, Paul and Aaron are poised to unleash a second helping of hard-to-categorize, impossible-to-ignore music on us. One listen to Free The Bees will convince you it was worth the wait. A couple more listens in, and you’ll be back on the same gently lapping wavelengths that made Sunshine Hit Me such a heavy-rotation play in the nation’s disc-drives.

What, though, of the shed – the fabled assembly-kit construction in Paul’s parents’ garden where Sunshine took shape, and which the duo swore they would never contemplate leaving? It’s still there, as it happens. But Paul and Aaron have since, Help!-style, shacked up together in a nearby house, one floor each with a studio between them. The plan was to record their follow-up here; until, that is, Paul did a stint in the record-producer’s chair during sessions for fellow islander Drew at Abbey Road, and was exposed to the gravitational pull of the studio where a certain four-piece from Liverpool once made history. Two years ago, I asked them what they’d do if they couldn’t record in the shed. The response then was a look of horror on both their faces. The answer now: “We thought, simple: we’ll be in the best studio in the world.”

If you were in any doubt that the contractual switches and resulting delays of the past two years had had an effect on the band, even the briefest exposure to Free The Bees dispels them. The track “Wash In The Rain” typifies both the tone and the pace. Lashings of Hammond, a great big top-of-the-mix bassline, a dirty old guitar riff, and someone in the distance having a ball with his old pee-yanner. On top of this glorious mess a vocal from Paul that attests to months of wearing his voice to a sandpapered frazzle on the road (or “learning how to shout”, as he puts it). And the icing on the cake, Aaron’s trademark double-edged lyrics – lines like “Try and I fail … sometimes I even succeed” doing that crafty Fletcher thing of ringing a bell faintly on first listen, and then going off with the impact and resonance of a depth-charge ever after.

Ask Aaron what impels him to write his dreamy but distinctly ambiguous lyrics and he’ll shrink into a corner, like a schoolboy who’s just been asked to recite a poem at prize-giving. “A bit of fantasy, a bit of reality,” was about all I could get out of him, plus an admission that his hope for a song is that “you can relate to it and then you can dream about it.” As they’ve shown us before, A Band of Bees like to slow things down a bit too, and songs don’t come much woozier or more blissed-out than “I Love You”, a track that takes the band’s escapist ethos and bottles its essence for our delectation. Temptations-type backing vocals underpin Paul’s croony rendition – through a vintage 1960s RCA mike – of Aaron’s laid-bare words: “You wouldn’t walk away if my stories, they weren’t true.” But the band that once romped through “A Minha Menina” also have a fondness for pell-mell, hurtling sonic mayhem, and the frankly sectionable “Chicken Payback” proves that life across the Solent isn’t all lazy Sunday afternoons spent flat-on-their-backs in the tall grass (though, for sheer musical and lyrical inertia, the Aaron-vocalled “Go-Kart” takes some beating, with its stupefied lamentation that “There’s plenty of room for advantage; it’s the effort required that makes me so tired.”) A chip off the old Shirley Ellis Clapping Song block, “Chicken Payback” is A Band of Bees at their most unbridled and least disciplined, a track that almost collapses under its heavy, punctuating brass stabs, and Paul’s exhortations to “All the animals together” and the mysterious “Monkey!” Another sparkling highlight on an album studded with gems is “Horsemen”, which positively glows with the influence of Paul and Aaron’s classic-vinyl collection. A Brian Wilson-homaging beauty of a chorus, and yet another verbal flourish that can’t stop your mind from wondering." I have told you not to worry” it commands, and instantly you want to take the song up on its suggestion.

Sunshine Hit Me was the work of two shed-bound mates, eyeball to eyeball across their analogue equipment. Free The Bees sees the band in their expanded form. First as friends and now as fellow Band of Bees (and, yes, still friends), Kris Birkin (guitar), Michael Clevett (drums), Tim Parkin (trumpet) and Warren Hampshire (hammond) had been playing with Paul and Aaron for years in any number of incarnations – from special-occasion free-for-alls to back-to-mine jams – so, when it came to bolstering the line-up and taking their music on the road, the original duo didn’t have far to look.

Two years on, that scratch band has become a crack one. There is no evidence of the growing pains that often bedevil follow-up albums recorded with additional personnel and the dubious luxury of a multi-track recording desk. Even in Abbey Road, the maximum the band allowed themselves was 16 tracks. And if anything, Free The Bees is cruder than its predecessor, at least in terms of its sonic finish, and is all the more liberating as a result. It’s as if, making huge strides in the songwriting department, Paul and Aaron saw a need to cling on for dear life to the rawness and ardor that lent their debut its urgent immediacy. Bands sifting through old vinyl, recording only on analogue (think Toerag), wearing their influences on their sleeves – such groups are 10 a penny in the current climate. And to a certain extent it could be argued that everyone engaged at the musical coalface is mining the same limited material, albeit sometimes with more modern tools. It’s what you do with the stuff once you’ve hacked it out that counts. And this is where A Band of Bees stands apart. They not only defy categorization – they revel in such an exercise’s absurdities.

Remember “No Trophy’s” raucous reggae? It makes a comeback here, on the alternately jolly and menacing “No Atmosphere”, which somehow also finds room for the rhythmic oom-pah-pah of a one-man-band, before rushing headlong into infectious chaos. Not to mention a second appearance on the skewed instrumental, “The Russian”, where it shares speaker-space with big-top cymbal crashes, the eerie grooves of an Eastern Europe spy flick, and an ending that imposes an arranged marriage on genres as hitherto incompatible as free jazz and classic 70s soul.

As for the effect on their music of recording in that famous studio, A Band of Bees clearly succumbed to its strange magic: listen to the razor-sharp guitar, to the bass-that-thinks-it’s-the-lead, on “This Is The Land” or opener “The Ghosts”, and you’ll hear just why Paul and Aaron were lured out of their shed. As you will, indeed, on each of Free The Bees 12 tracks. They represent irrefutable (and life-affirming) evidence of a band still hopelessly in love with the idea of being in love with music. Sure, jostling for their affections are that time-warped mini land-mass adrift in the English Channel, and a pile of dog-eared and scratched LPs. But A Band of Bees have a higher calling, and it’s to their great credit that, faced with the temptations of the relatively stress-free existence of island life, they have chosen instead to continue embracing the chaos and answering the call. Listening to Free The Bees it’s tempting to find in it merely escapism set to music. It’s a bit darker and messier than that, though no less beguiling.

And, as A Band of Bees demonstrates so powerfully, even escapism requires structure in the end.

The US version of Free The Bees will feature two bonus tracks: "It Isn't Exact" and "These Are The Ghosts (Undead Version)"

A Band Of Bees Photos 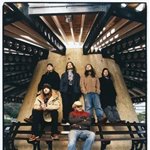