Their debut album, released in 1994, was called Nineteen Ninety Quad, a reference to the year of its release. Nineteen Ninety Quad was a huge success in and around Florida, popular with Floridians of the generation of the album release time frame. The band was awarded three Soul Train Music Award nominations in 1995. [1] Their second album, The Wait Is Over, came out in 1998, and their third album, 2069, in 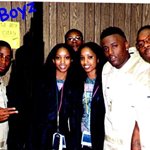