A monster combination of fury and finesse, their debut, Lost Angel , reflects the hard work, and even harder life, that Korthe and company have had to endure. Unlike much of today¹s contemporary loud rock, which clobbers its listeners with drab, downtuned power chords, 3rd Strike weaves in huge swaths of melody as Korthe sings and raps his way through a colorful grid of guitar riffing supplied by Deguchi and Erik Carlsson. Says Deguchi of the band¹s sound: " We¹ve always done the rap thing and mixed it up with melody. Our sound has been in place for a long time.

That heaviness is supplied not only by Deguchi and Carlsson, but by a great rhythm section featuring heavyweight drummer PJ McMullan and groove bassist Gabe Hammersmith. Together, the quintet is as talented as it is ambitious. "We don¹t want to limit ourselves to just being heavy," says Korthe. "We want to be able to play different styles but have it done in our own way. We definitely don¹t want boundaries around our sound."

On songs like the searing opener "Flow Heat" and the charging sound of "Cities on Fire," 3rd Strike proves its ability to rock hard with
exhilarating dynamics and fist-punching energy. Less predictable, but no less powerful, are tunes like "No Light" and "Hang On" which merge
extraordinary melody, potent, rubbery grooves and Korthe¹s intelligent, social commentary. Recorded by Mudrock (Godsmack, Powerman 5000) with additional tracks produced and mixed by Toby Wright (Alice and Chains, Korn, Sevendust ) and mixed by Chris Lord-Alge, the disc heralds the arrival of an immense new presence on the rock scene. "This is the kind of stuff we¹ve wanted to do--incorporate heavy guitars with rap and melody," Korthe says. "This is what our dream was and now we¹ve finally seen it through."

Not that 3rd Strike--Korthe in particular--hasn¹t had its share of nightmares as well. He spent the better part of his youth in a gang and his experiences, some incredible, some just plain horrifying, show up throughout the album. Korthe explains, "My family was screwed up so the gang for me was my family. They put their arms around me and told me they loved me." Still, Korthe often portrays gang life for what it really is: violent, stark, and lonely. "The bottom line is that no one¹s gonna have your back when it¹s time. You¹re gonna go out alone." On "Breathe It Out," a story about gang life, Korthe backs himself up: "Street talking façade helps you justify this genocide/That¹s the card you deal to hide the pain you feel, claimin¹ homey love but I'm telling you it isn't real."

"Yeah, there¹s a little violence in my past," says Korthe. "I still have pride from living through that. It taught me a lot about what is really important. It¹s not about slanging dope and making money. It¹s a relationship thing. If you have tight friends and family that¹s it. I took the long route to find that out."

On "Redemption," he describes a perverted relationship. "It was a sick love story," he admits. "The worse I treated her the more she wanted and needed me." He writes: "No love is sicker than the one we¹ve found/Keep a frown on your face so she¹ll never replace me." Korthe pens his lyrics with startling intensity and the kind of emotional honesty that¹ll double you over with a gut punch and stand you straight with an uppercut. You won¹t find this kind of honesty-- drawn from real experiences-- on records by the band¹s peers. "When I sit and write I try to get things outta my head," he says. "There will be some songs that I write where I¹m just angry about the hypocrisy and I vent. And then there are some songs that have actual messages."

Korthe admits he still battles his inner demons. On the very first line of the record, he lays it on the line, preparing his listeners for the intense candor to follow, "Resist one more time, walk the line, burning through the pages of my life cuz I can¹t help myself decide if I want to live or die."

Korthe and Deguchi didn't want to see their investment of time and energy go unrewarded. They regrouped to write more music and together they recruited a band. "There was a time when everything was taken for granted," says Deguchi. "We didn¹t know where we were going, everything was really unsure. But we¹re so much more stable now. We have great team and I feel more confident about our direction."

After bringing in McMullan, Hammersmith and classically trained guitarist Carlsson, they began gigging. While they were recording in Pennywise's studio, guitarist Fletcher Dragge, heard their demo, loved it and hooked them up with their own management company.

As for the immediate future, 3rd Strike are looking ahead to national exposure and tons of touring. They just finished recording an awe-inspiring cover of Black Sabbath¹s "Paranoid" with a cameo from DJ Muggs of Cypress Hill, for the upcoming ESPN X Games movie soundtrack. For the first time in his life, the future looks bright for Korthe and 3rd Strike. At least he has a positive platform from which he can begin issuing his empathic odes to frustration, anger, and redemption.

"I¹m a different person every day," he says, "So we have different messages coming from the band. There¹s a yin and yang thing there. At one point I¹m human, then I¹ll feel violent, and the next I¹m in love. I think our fans will be able to identify with that."

Welcome to the emotional apocalypse of 3rd Strike. 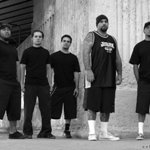