A Snow Capped Romance is a romance with people, places and situations... a romance with life itself for 36 Crazyfists' vocalist Brock Lindow. "The last record (Bitterness The Star - 2002) had more depressing subject matter. It was about dwelling on bad relationships and negative things. As we toured and played these songs all the time, we realized that we needed to write more positive material. There will always be things that depress everyone, but A Snow Capped Romance is about getting past that stuff and focusing on the good things that have happened in your life," says Lindow.

Alaskan born and bred, Lindow, Steve Holt (guitar), Mick Whitney (bass) and Thomas Noonan (drums) who now reside in Portland, OR, immediately took to the road following the release of Bitterness The Star, touring the US with the sonically varied likes of Candiria (who became super '36' fans), God Forbid, Chimaira, Diecast, Hotwire, among others and embarked on the European Road Rage tour with their labelmates, Killswitch Engage and Five Pointe O, and got their touring legs firmly underneath them. After their hectic tour cycle, the band took time off to write new material. I started writing templates for songs and laying down ideas, says guitarist Steve Holt. Musically, everything is more focused. We all had ideas about what we wanted to accomplish, where we wanted to go and how we wanted the music to be. A conscious effort to keep the album clean was in effect as well. As Lindow explains "It is much harder to find alternate ways to express yourself, lyrically. Looking back on the last record, the cursing just didn't sound right to me. I tried to avoid it this time."

Lindow expands on his lyrical progression, saying, I didn't want to write about the same things again, because my life is so different from when I wrote the Bitterness... record. The epic Cure Eclipse is one of the first songs the band wrote during the 'Snow Capped sessions and it set the right tone. This song set the format for the entire record, says Lindow. It helped me get past situations I was in prior to writing the record. There is even a lyric that says, 'This year cure me' and that's an overall theme. That said, it was the feverish At The End Of August, that became the earliest public offering from the band, having been featured on the MTV2's Headbangers Ball soundtrack. It's one of my favorite songs it's about friendship. It's very aggressive, and it's a great rock jam, says Lindow making it perfect for the compilation. Installing The Catheter is a really inspirational tune. I talk to myself when I write," says Lindow. "The 'you' in the lyrics is 'me.' Basically, I'm saying, 'Change my life' rather than continually talking about anything that keeps me down. While the lyrical content may veer off into new directions, Lindow's utterly distinct vocal style, which falls somewhere between System Of A Down's Serj Tankian and Thursday's Geoff Rickly, remains constant. Consequently, A Snow Capped Romance is a more mature, focused album that taps into a vein of emotionally charged aggression in a signature '36' fashion. This sophomore effort promises to thrust the band to the forefront of the "(scr)emo" / post-hardcore movement.

The right team had to come together to make such a powerful album. A Snow Capped Romance was produced by James Wisner (Dashboard Confessional, Further Seems Forever). '36' chose Wisner specifically to achieve some natural sounds - he is good with harmonies and worked really well with Brock, says Holt. The band then switched gears and chose veteran Andy Sneap, arguably the most notorious mixer in heavy music, who has worked with Earth Crisis, Killswitch Engage and Arch Enemy, among others. The combination proved perfect and brought out the best in this unique act.

Brock, Steve, Mick and Thomas also assert that the album title is a tribute to their home state, one most Americans don't keep in the forefront of their consciousness due to its physical distance. The whole record is also about the love we have for Alaska, admits Lindow. We want to always remember where we are from. It's good to be in love with your surroundings. A Snow Capped Romance is sure to start many a fan's love-affair with the music of 36 Crazyfists and fans should know the love is mutual. "We love touring and getting out there to meet fans," says Lindow, "look out for us on the road this time around. It is going to be great!" 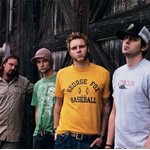