At the height of boy band popularity MTV decided to poke fun at itself while, of course, making money and denying a much needed revolution in the actual music they played. 2gether is a fictional boy band (similar to Spinal Tap or The Monkees) whose composition, songs, and formation story is a direct parody of the boy bands of the late 1990s such as *NSYNC and Backstreet Boys. They were part of an MTV movie and an MTV television series, both of the name 2gether.

In the movie, the band had a breakout single titled “U + Me = Us (Calculus)”, which they followed up with “Say It (Don’t Spray It)”. The actors who played the characters actually did perform the vocals for their performances. They opened several shows for Britney Spears’ 2000 summer tour, always appearing in character. A full length eponymous album of their comedic music was released, and produced a respectable single “The Hardest Part of Breaking Up (Is Getting Back Your Stuff)” which charted as high as 87 on The Billboard Hot 100.

They debuted in the movie of the same name on MTV; it was actually the first full-length movie produced exclusively for MTV, and was broadcast without interruption on February 21, 2000. Following the success of the movie’s broadcast, MTV used the same characters as part of a regular series, 2gether: The Series, which stayed on the air for two seasons until the death of Michael Cuccione. Many of the show’s spoof ideas came from video director Nigel Dick. Michael James Cuccione, who played Jason (Q.T) McKnight in both the movie and the show was born on January 5, 1985 and survived 2 fights of Hodgkins disease. He was in remission but due to the radiation which caused his lungs to have respiratory problems, it became very difficult for him to breathe. Cuccione was rushed to the hospital in December of 2000 and lost his life 8 days after his 16th birthday on January 13, 2001. 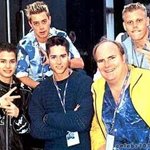