Tupac grew up around nothing but self-delusion. His mother, Alice Faye Williams, thought she was a "revolutionary." She called herself "Afeni Shakur" and associated with members of the ill-fated Black Panther Party, a movement that wanted to feed school kids breakfast and earn civil rights for African Americans. During her youth she dropped out of high school, partied with North Carolina gang members, then moved to Brooklyn: After an affair with one of Malcolm X's bodyguards, she became political. When the mostly white United Federation of Teachers went on strike in 1968, she crossed the picket line and taught the children herself. After this she joined a New York chapter of the Black Panther Party and fell in with an organizer named Lumumba. She took to ranting about killing "the pigs" and overthrowing the government, which eventually led to her arrest and that of twenty comrades for conspiring to set off a race war. Pregnant, she made bail and told her husband, Lummuba, it wasn't his child. Behind his back she had been carrying on with Legs (a small-time associate of Harlem drug baron Nicky Barnes) and Billy Garland (a member of the Party). Lumumba immediately divorced her.

Things went downhill for Afeni: Bail revoked, she was imprisoned in the Women's House of Detention in Greenwich Village. In her cell she patted her belly and said, "This is my prince. He is going to save the black nation."

By the time Tupac Amaru Shakur was born on June 16, 1971, Afeni had already defended herself in court and been acquitted on 156 counts. Living in the Bronx, she found steady work as a paralegal and tried to raise her son to respect the value of an education.

From childhood, everyone called him the "Black Prince." For misbehaving, he had to read an entire edition of The New York Times. But she had no answer when he asked about his daddy. "She just told me, 'I don't know who your daddy is.' It wasn't like she was a slut or nothing'. It was just some rough times. "When he was two, his sister, Sekyiwa, was born. This child's father, Mutulu, was a Black Panther who, a few months before her birth, had been sentenced to sixty years for a fatal armoured car robbery.

With Mutulu away, the family experienced hard times. No matter where they moved-the Bronx, Harlem, homeless shelters Tupac was distressed. "I remember crying all the time. My major thing growing up was I couldn't fit in. Because I was from everywhere. I didn't have no buddies that I grew up with."

As time passed, the issue of his father tormented him. He felt "unmanly," he said. Then his cousins started saying he had an effeminate face. "I don't know. I just didn't feel hard. I could do all the things my mother could give me, but she couldn't give me nothing else."

The loneliness began to wear on him. He retreated into writing love songs and poetry. "I remember I had a book like a diary. And in that book I said I was going to be famous." He wanted to be an actor. Acting was an escape from his dismal life. He was good at it, eager to leave his crummy family behind. "The reason why I could get into acting was because it takes nothing' to get out of who I am and go into somebody else."

His mother enrolled him in the 127th Street Ensemble, a theatre group in the impoverished Harlem section of Manhattan, where he landed his first role at age twelve, that of Travis in A Raisin in the Sun. "I lay on a couch and played sleep for the first scene. Then I woke up and I was the only person onstage. I can remember thinking, "This is the best shit in the world!" That got me real high. I was getting' a secret: This is what my cousins can't do."

In Baltimore, at age fifteen, he fell into rap; he started writing lyrics, walking with a swagger, and milking his background in New York for all it was worth. People in small towns feared the Big Apple's reputation; he called himself MC New York and made people think he was a tough guy.

He enrolled in the illustrious Baltimore School for the Arts, where he studied acting and ballet with white kids and finally felt "in touch" with himself. "Them white kids had things we never seen," he said. "That was the first time I saw there was white people who you could get along with. Before that, I just believed what everyone else said: They was devils. But I loved it. I loved going to school. It taught me a lot. I was starting to feel like I really wanted to be an artist.

By the time he was twenty, Tupac Amaru Shakur had been arrested eight times, even serving eight months in prison after being convicted of sexual abuse. In addition, he was the subject of two wrongful-death lawsuits, one involving a six-year-old boy who was killed after getting caught in gang-war crossfire between Shakur's gang and a rival group.

In the late eighties, Shakur teamed up with Humpty-Hump (a.k.a. Eddie Humphrey, a.k.a. Gregory "Shock-G" Jacobs) and other Oakland-based rappers to create Digital Underground, a band intent on massive bass beats and frenetic, Parliament-Funkadelic-style rhythms. In 1990, the group released its debut and best album, Sex Packets, a pulsating testament to the boogie power of hip-hop, featuring two classic tracks, "Humpty Dance" and "Doowutchyalike." After an EP of re-mixes in 1991, D.U. released Sons of the P and, the following year, The Body-Hat Syndrome, all on Tommy Boy Records.

In 1992, Shakur entered a most fruitful five-year period. He broke free of D.U. and made his solo debut, 2Pacalypse Now, a gangsta rap document that put him in the notorious, high-speed lane to stardom. That same year he starred in Juice, an acclaimed low-budget film about gangs which saw some Hollywood success. In 1993, he recorded and released Strictly 4 My N.I.G.G.A.Z., an album that found Shakur crossing over to the pop charts. Unfortunately, he also found himself on police blotters, when allegations of a violent attack on an off-duty police officer and sexual misconduct arose. The same year, Shakur played a single father and Janet Jackson's love interest in the John Singleton film Poetic Justice.

In November of 1994, he was shot five times during a robbery in which thieves made off with $40,000 worth of his jewellery. Shakur miraculously recovered from his injuries to produce his most impressive artistic accomplishments, including 1995's Me Against the World, which sold two million copies, and the double-CD All Eyez on Me, which sold nearly three million & was released during 1996. As his career arc began a steep rise toward fame and fortune, Shakur was shot (most say suspiciously) and killed after watching a Mike Tyson fight with Death Row Records president Marion "Suge" Knight. Though his death was a jolt to his fans and the music community, Shakur himself often said that he expected he'd die by the sword before he reached thirty.

Following his passing, Shakur's label released an album, The Don Killuminati, under the pseudonym "Makaveli." The cover depicted Shakur nailed to a cross under a crown of thorns, with a map of the country's major gang areas superimposed on it. In January of 1997, Gramercy pictures released Gridlock'd, a film in which Shakur played the role of a drug addict to mostly good reviews. His final film, Gang Related, was released in 1997, and Death Row is said to have several unreleased recordings in the vaults for potential future release. 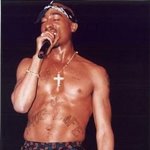