As life rushes toward the Millennium at rat-race speeds, the need for laid-back escape is stronger than ever. While vacations are not always possible, the southern r&b flavor of 112 will definitely provide that relaxation you're looking for. Comprised of Marvin, Daron, Mike and Q, 112 is the male quartet from Atlanta, Georgia whose lead off single, Only You from their debut album set the romantic record straight: "Our songs are like stories," explains Daron, "They're tasteful not vulgar."

A mixture of ballads and up-tempo R&B, 112's self-titled debut CD howcases their full vocal and instrumental range. Each track takes you to the emotional high of a love returned and the lows of a love unrequited.

Regardless of style, their music unmistakably touches an emotional and spiritual chord a signature sound they attribute to their spiritual foundation.

"The church is a significant part of our lives." says Mike. With their friendship going back to high school days, the guys naturally have shared a strong bond. It all started while singing in the Tenor section at Atlanta's Walter Franklin George High. "A teacher picked us four to sing at a school coronation," says Q. "We became a group by mistake. Afterwards somebody asked us to do a talent show." It was their performance at the talent show that caught the attention of their present managers, Courtney Stills and Kevin Wales.

After hearing the group, Still and Wales introduced them to Bad Boy Entertainment CEO Sean "Puffy" Combs, who signed them to a record deal with his label. "They're right in between Jodeci and Boyz II Men," Combs explains. "Four guys, two 16 year olds, two 17. I just named them after a club in Atlanta. That place has been rockin' for years. All the true playas and playettes be up in that piece." Puffy wanted us to be affiliated with that land mark, "It's just a part of the lifestyle in Atlanta." Mike adds. Joining the Bad Boy family has brought the group to the next level. Working with big names like Wayne Morris of Boyz II Men, Al B. Sure and the late Notorious B.I.G, "We were able to collaborate our concepts with some of the most artistic people." Daron says. 112 are definitely a united force, which is obvious by the way they generously share the role of lead vocals throughout the album. Like Q says: "No matter how things add up 1 and 1 and 2 equals four." 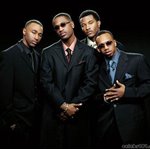