Recaño was born in St. Louis, Missouri, the oldest of four children. Her father was a Filipino-Spanish mestizo[1] having emigrated to the United States to pursue a career in medicine. Her mother was German-Hungarian. She studied dancing and piano, and attended high school at Cor Jesu Academy.

At the age of 15 she auditioned for a kids' show on local station KPLR-TV, called Team 11, that was seeking young people between the ages of 13 and 23 who could also sing and dance and act, for an after-school television variety show. Recaño was chosen, and became one of four reporters on the show to produce news featurettes on subjects such as anorexia, depression, divorce, and the environment. She also hosted The Disney Afternoon, for which she won two Emmy Awards.

In 1996, she joined KPLR's News at Nine as a general assignment reporter. From 1998–2001, she was the news anchor for ZDTV, later renamed as TechTV News. After ZDTV, she worked as an anchor and reporter for KNTV, the NBC affiliate in San Francisco. In July 2002, she joined Inside Edition.

In 2004, she was named as a correspondent for the new television newsmagazine The Insider.[2] 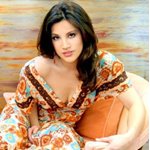