An appealing fair-haired player who got her start as a teen model, Vinessa Shaw has been a working actress since 1991 but her breakthrough role came eight years later when she played affable prostitute Domino in Stanley Kubrick's final effort "Eyes Wide Shut". A versatile performer, she convincingly portrayed characters that ranged from the angelic to the vampy and had a natural ease in front of the camera that aided her child acting career which has matured into a confident, compelling presence as an adult. A California native, Shaw was immersed in show business at an early age, with her mother and sister both working as actresses. She made her acting debut at age ten in the UCLA graduate film "My Day at Camp", and the following year, when next door neighbor and folk singer Peter Alsop needed a voice to accompany his, he looked no further than Shaw, who recorded and toured with him as part of the Karamazoff Brothers Circus. A career in modeling followed this, and landed Shaw on the covers of such magazines as Seventeen and British Vogue.

In 1991, Shaw made her TV acting debut in the NBC TV-movie "Long Road Home" and hit the big screen the following year with a featured role in the comedy "Ladybugs". Here she essayed the first of several performances as a dream girl, playing a soccer-playing youngster whose ringer teammate (Jonathan Brandis as a boy masquerading as a girl) falls in love with her. While this Rodney Dangerfield vehicle didn't impress at the box office, it did find an audience on cable, beginning Shaw's fan following. That same year she had a recurring role as the love interest of the title teen (played by Tobey Maguire) on Fox's acclaimed but short-lived comedy "Great Scott!" More work was forthcoming in 1993 with roles in the failed pilot "Country Estates" (aired as a TV-movie on ABC) and a turn in a segment of Showtime's anthology series "Fallen Angels" entitled "The Quiet Room". She was featured in the supernatural children's comedy "Hocus Pocus", playing one of three kids able to break the spell of a trio of wacky witches.

1994 saw the return to the small screen with a role in the pilot/premiere of ABC's quickly cancelled drama "McKenna" (although she subsequently was replaced by Jennifer Love Hewitt). A memorable 1995 guest turn on the Fox police series "New York Undercover" featured Shaw as a young model who is the victim of a disfiguring attack. Next up was a starring role in the coming-of-age drama "Coyote Summer", and subsequently racked up credits in the period feature "Wayward Son" (screened in Toronto in 1999) and the quirky independent "L.A. Without a Map" (1999). A student at famed Barnard College, Shaw dropped out in her freshman year when she landed the much-coveted featured role in "Eyes Wide Shut" (also 1999). In the film, she played an alluring young prostitute named Domino who has an encounter with Tom Cruise's character. She then headed to Halifax to co-star in the Kathryn Bigelow feature "Weight of Water" (2001), starring Sean Penn and Sarah Polley. In 2000, Shaw took a starring role in the NBC miniseries event "The '70s", playing a suburban golden girl attending Barnard whose pursues a life of activism when she is done wrong by her conservative boyfriend (Brad Rowe) and is turned on to the feminist movement. Starring opposite fellow California native and longtime friend Amy Smart, Shaw reached her largest audience with her solid turn in the highly-rated miniseries. 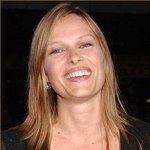