At the age of 14, Q'orianka Kilcher emerged into the front ranks of young actors with her portrayal of Pocahontas opposite Colin Farrell and Christian Bale in Terrence Malick's The New World, an epic film about the dramatic encounter between English and Native American cultures in 1607. Her performance won her the National Board of Reviews best breakthrough performance of 2006 and the 2006 Alma Award for best Latin American actress in a feature film ,as well as numerous nominations and rave reviews.

Having started her performing arts career at age 6, she is not only an award-winning actress with high critical acclaim, an amazing singer /songwriter and expert dancer , but also a committed human rights and environmental activist and fearless, powerful young force,who uses her voice as tool to bring the need for universal dignity, compassion, environmental justice and basic Human Rights, to the attention of the international community...

Traveling frequently to speak at youth events, colleges and Universities Q'orianka has been invited as a featured keynote speaker and workshop facilitator at many international conferences and events for organizations such as Amnesty International, the IFG (international Forum on Globalization), Amazon Watch IFIP (International Funders for Indigenous Peoples) and The United Nations/panel discussions entitled "Indigenous Peoples: Human Rights, Dignity and Development with Identity, in collaboration with the Declaration on the Rights of Indigenous Peoples.

She also lends her celebrity, voice and energy as spokesperson,collaborator and supporter to several international and national NGOs and organizations such as Amazon Watch, Youth Ambassador Amnesty International (Global Youth Ambassador for woman's Rights) AIDESEP (Spokesperson and Voice) Interethnic Association for the Development of the Peruvian Rainforest Federations) The Community School for the Arts foundation (volunteer/spokesperson) and Thursdays Child (youth counselor) Turning The Tides ((volunteer/spokesperson) Save Americas Forrests IDEM (South Dakota Youth Project) and is a spokesperson for the American Literacy Campaign (The only teen Native American spokesperson in history. She is presently working with the National Endowment For The Arts " The Big Read" Campaign, and will be recording a Book Review for the Campaign. Qorianka is also frequently volunteering her time reading Howard Zinns "The People Speak" at various open to the community staged readings, and just joined the Cast and Starring-Ensemble for the first "People Speak" Film Series (Starring Matt Damon, Sean Penn, Josh Brolin, David Straithern)

In her free time, Qorianka is an accomplished Singer Songwriter and recently launched her own youth driven human rights and environmental organization on-Q initiative, heading off campaigns to connect young Hollywood with youth activist leaders and projects from around the world, in support of environmental sustainability, corporate accountability, basic Human Rights and universal dignity and compassion in all its forms.

Through her production company, IQ-Films, Qorianka is also producing several cause driven documentaries and youth-programming projects. 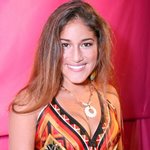