In his post-Maiden career, Di'Anno has issued numerous albums over the years, as both a solo artist and as a member of such bands as Gogmagog, Di'Anno's Battlezone, Praying Mantis, and Killers.

In the mid-1990s, rumours began to surface that Di'Anno might be rejoining Maiden (after the exit of Bruce Dickinson in 1993), but the speculation proved to be false, as Maiden hooked up with former Wolfsbane vocalist Blaze Bayley, before reuniting with Dickinson in 1999.

In 2001, Di'Anno moved to São Paulo, Brazil, he was still playing music and releasing his latest solo album, Living Dead, in 2006.

Paul has had several businesses outside of the music industry which have included an internet cafe and a hotel/restaurant in England, which he has now sold.

All 3 albums by Battlezone have recently been re-released as a box set under the title of The Fight Goes On. Di'Anno is currently recording a new solo album with Paulo Turin, the guitarist who worked on Feel My Pain and Nomad. The album is being produced by Dieter Roth in his own studio in Germany. 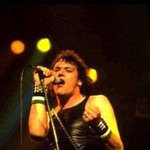