As actress Kim Tiddy says goodbye to The Bill, the single minded star has only positive thoughts about her step into the unknown, she tells Sue Crawford.

Leaving a popular primetime drama for the uncertain world of unemployment might seem like a risk bordering on the reckless, but then Kim Tiddy has never lacked courage. When the actress first tottered onto our screens in March 2003 as dizzy blonde PC Honey Harman, she had to strip to her underwear in front of a cast and crew she’s met just minutes before – not to mention a national audience of millions.

But now, after more than three years in the role and after months’ deliberation, Kim has just announced she will be leaving The Bill later this year. “I’m happy with my decision, although it was a difficult one” she says, her striking grey eyes fixed firmly ahead. “I’m well aware that many actors are out of work and I’m quite prepared for that. I am nervous, but they are positive nerves. I never feel sorry for myself for too long.”

We meet mid-morning for a leisurely cappuccino in Wimbledon, close to the set of The Bill and not far from Kim’s flat. She arrives fresh from a 10km run – not remotely out of breath, thanks to the fitness built up in her teenage years when she played basketball for England. Indeed, her sporting talent once looked set to shape her career when she was offered a scholarship in America, aged 20 – but at only 5ft 7ins, Kim concluded she wasn’t cut out for a slam-dunking future.

Fortunately though, the young Miss Tiddy was blessed with talents beyond the basketball court. A regular performer in school plays from her early years; she abandoned these sporting dreams to study drama at the Arden School of Drama in Manchester. A stint at the Salisbury Playhouse followed, but then the roles dried up.

Undeterred, she took on work as a waitress, before setting up her own cleaning company to make ends meet. She managed to find a couple of unpaid parts in short films, but after two years, when no other acting work had materialised, a disillusioned Kim swapped her mop and bucket for the prospect of bar work in sunny Spain.

But it wasn’t long before she began to have second thoughts. And the day after she booked her flight back to Britain, her agent called her to say she had an audition for The Bill.

Blessed with good looks and a trim, athletic figure, it isn’t hard to see why Kim landed the role of man-magnet honey. But off-screen, a love interest has proved more elusive – a fact that Kim, 28, puts down to personality. “A strong woman is intimidating to some men,” she says. “Some guys prefer a damsel in distress and I won’t ever be that.” But being unattached doesn’t seem to bother her. “I’m just focused on myself at the moment,” she adds. “If Mr. Wonderful came along, then great – but it’s just not very important to me at this moment in my life.”

In fact, Kim’s single status could prove a blessing at this crossroads in her career. It’s clear that her heart lies in theatre work, and her eyes light up at the prospect of landing a meaty role – perhaps abroad. “I’ve no ties – no kids, no husband or boyfriend so it would be great.

Whether Honey Harman will be killed off is yet to be decided, but Kim is happy to leave her fate to the writers (“I’m not one of those actors who bashes down a producer’s door demanding a fantastic storyline. What will be, will be”). But should the offers fail to flood in, Kim won’t let financial worries stand in the way of happiness – an attitude instilled in her from an early age. “I had a lovely childhood” she says. “There were four kids and my mum in a two-and-a-half bedroom house on a council estate and we weren’t well off at all, but most of the time we were really happy.”

But while the future is uncertain, Kim is quite definite about one thing: “I won’t be cleaning houses again. If needs be I‘ll deliver pizzas on a moped, anything but cleaning!”

Something tells me the tenacious Ms. Tiddy won’t be settling for second best just yet. 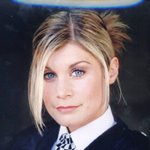