Keke Palmer is an actress/singer who won a small role in the feature film, BarberShop 2 - Back In Business, at the tender age of nine. The role of, Gina's Niece, though small, was significant in the movie because Gina was none other that the sensational, Queen Latifah. Keke more than held her own against the likes of comic, Cedric the Entertainer, arguably she stole the scene. That role led to a series of guest-starring roles on television shows like, Strong Medicine, Cold Case, ER, and Law & Order SVU. Keke later went on to star in an Emmy-nominated made for TV movie entitled, The Wool Cap, where she worked alongside one of her favorite actors William H. Macy. Her amazing performance in Wool Cap was so remarkable, that it earned her an NAACP Image Award nomination for Best Actress in a Movie Made for Television, as well as a Screen Actors Guild Nomination in the Best Leading Actress category. Who were her fellow nominees? Charlize Theron, Hilary Swank, Glen Close & Patricia Heaton, Close went on to win , still ,pretty impressive for a kid who had only been acting for one year! Keke is the youngest actor to ever be nominated by the guild in a Lead Actor Category. Recently, Keke had the pleasure of co-starring in the made for television movie, Knights Of the South Bronx, with former Cheers star, Ted Danson.

In less than two years, Keke has done several national commercials, made for TV movies, television guest starring appearances, shot a pilot for her own show on Disney Channel, Keke & Jamal, and two LionsGate family movies, Madea's Family Reunion, starring Tyler Perry, Blair Underwood, Lynn Whitfield, Cicely Tyson, Maya Angelou, which hits theaters February 24th, 2006, Akeelah and The Bee, starring Laurence Fishburne and Angela Bassett opening April 28th, 2006. Keke is also an accomplished singer/songwriter and just recently signed a major recording contract with Atlantic Records. Although she had offers from three other major labels, Keke felt strongly that Atlantic was the right place for her, after all, it is the label that launched the careers of legendary artists such as, Aretha Franklin & Ray Charles. At the age of twelve, Keke has a long way to go, but no one can argue the fact that she is off to a fantastic start!Born Lauren Keyana Palmer, in Robbins, Illinois, (a small town 20 miles south of Chicago). Palmer showed vocal promise as a five-year-old when she belted out, "Jesus Loves Me" in her church choir. A year later, the singer /actress had a solo in her kindergarten play, but to her mom's dismay the mic had not been adjusted to suit her daughter's height. Without missing a beat, Palmer lowered the mic and moved the crowd with her heavenly voice. At that very moment, her family knew there was something special about Keke (a nickname given to her by her sister).

Although music was still her passion, Palmer first big break came via her acting skills, making her big screen debut in the 2004 "Barbershop 2: Back in Business", as Queen Latifah's niece. Immediately recognizing her star potential, the film's producers encouraged Palmer's parents to take their daughter to California to explore other acting opportunities. Relocating required that Palmer's parents leave behind the security of their jobs, a newly purchased home and uproot their other three children. However, it didn't diminish the family's support of Palmer's aspirations.

Once settled on the West Coast, Palmer did not waste any time. Within six weeks she had booked an episode of the critically acclaimed CBS Show, "Cold Case", booked a national K-Mart commercial, and was chosen from a nationwide search to play opposite William H. Macy in a TNT movie. Palmer's performance in, Wool Cap, was so amazing that it earned her a Screen Actors Guild Nomination, to date, she is the youngest actress, (then at age ten), ever to receive a nomination in a Lead Actress Category.

In 2006, Palmer appeared as the lead character, Akeelah Anderson in the critically acclaimed award-winning film "Akeelah and the Bee". The film, about young South Los Angeles girl who attempts to win a national spelling bee, won the hearts of audiences everywhere. Keke held her own, in scenes with acting veteran co-stars Angela Bassett and Laurence Fishburne. That very same year, Palmer appeared in Tyler Perry's, Medea's Family Reunion, which was number #1 at the box office for two consecutive weeks!

Palmer went on to win a 2007 NAACP Image Award for Outstanding Actress in a Motion Picture for her breakout role in, Akeelah and the Bee. She also received a ShoWest Award for, "Rising Star of the Year". Shortly after, Palmer lit up the small screen starring in the Disney Channel #1 hit movie "Jump In". This one-two punch of big screen success coupled with small screen ratings power made Keke Palmer a househould name in Hollywood.

Palmer contributed her first recording to the "Akeelah and the Bee" soundtrack entitled "All My Girlz" and followed it up with the ever popular "My Turn Now" on the Jump In Disney Channel Movie soundtrack. As if two soundtracks were not enough, she was also asked to sing "Tonight", an end title song from the smash hit Ben Stiller movie "Night at the Museum".

Look for her next in the feature film Cleaner, co-starring with Samuel L. Jackson, Eva Mendez and Ed Harris. Her single Footworkin hits stores in July 2007, her album So Uncool, hits stores September 2007. 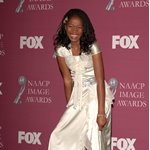 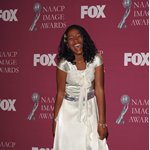