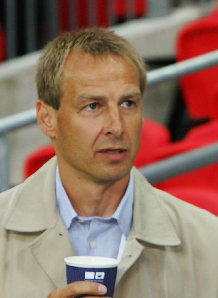 Jürgen Klinsmann (born 30 July 1964 in Göppingen) is a German football manager and former football player, who played for several prominent clubs in Europe and was part of the West German team that won the 1990 FIFA World Cup and the German one that won the 1996 UEFA European Championship. He was one of West Germany's/Germany's premier strikers during the 90s.

He managed the German national team to a third-place finish in the 2006 World Cup.

On 12 July 2006, Klinsmann officially announced that he would step down as Germany's coach after two years in charge and be replaced by assistant coach Joachim Löw. He took over as coach of Bayern Munich in July 2008, when Ottmar Hitzfeld stepped down to take over as the head coach of the Swiss National Team. He was fired from this position on 27 April 2009 despite winning five of his last seven matches.[1] 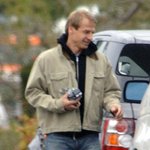