Julio Cesar is a Brazilian footballer who plays as a goalkeeper for Queens Park Rangers in the Championship. He also represents the Brazilian national team, having won 75 international caps, and appeared at the 2010 FIFA World Cup. He spent seven years at Italian club Internazionale, where he won five Scudetti, the 2009–10 UEFA Champions League and the 2010 FIFA Club World Cup.

He was awarded the Serie A Goalkeeper of the Year title in both 2009 and 2010, and was nominated for the 2009 Ballon d'Or, where he was voted into 21st place. Júlio César's international career began in 2003, when he was often called up as a backup to Dida. He was also included in Brazil team for the 2003 FIFA Confederations Cup, but did not play. His first international appearance came during the Copa América in 2004. He played in all six matches in the tournament as first-choice goalkeeper, as Dida chose to sit out the tournament. In the final match against Argentina, which went on to be decided by penalty shootout, Júlio César blocked Argentina's first penalty kick and Brazil went on to win 4–2. Júlio César still was the backup goalkeeper for Brazil for the next three years, however, earning only seven caps in the period. He was left out of the Brazilian squad for the 2005 FIFA Confederations Cup and 2007 Copa América, but was included in the 2006 World Cup squad as third-choice goalkeeper behind Dida and veteran Rogério Ceni.

After the World Cup and the international retirement of Dida, the competition to become Brazil's new first-choice goalkeeper began. He initially was out of favour, as new coach Dunga preferred Heurelho Gomes of Tottenham Hotspur, Helton of FC Porto, and Doni of Roma ahead of him. He forced his way into the team, however, and finally replaced Doni as first-choice goalkeeper in September 2007. Júlio César's next international tournament was 2009 Confederations Cup. The tournament was won by Brazil, who retained the trophy they won in 2005 by defeating the United States 3–2 in the final. 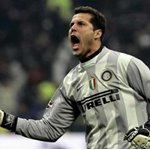