Jorge Lorenzo stormed onto the 125 scene in 2002 and has worked his way to being a title contender after only three seasons.

He moved up to the 250 Moto GP class for 2004, finishing fourth in the championship that year. He went on to becoming on of the most dominant 250 riders over the next two seasons and picked up a pair of 250 titles in '06 and '07.

After proving he had what it takes to be a Grand Prix champion there was only one thing left for him to do: Step-up to the big leagues.

For 2008 the Spanish sensation moved into the MotoGP paddock to see where he stood amongst the best in the world. His teammate on the Fiat Factory Yamaha MotoGP squad is some fellow by the name of Valentino Rossi.
Yamaha was nice enough to build a wall in the garage between the two team-mates so that the serious Spaniard wasn't driven crazy by the unruly Italian. It turned out to be a very up and down rookie year for Lorenzo. He started well, with a victory in the third race and claiming a number of poles and other podiums. Yet, the normally conservative rider experienced a lot of crashes. Lorenzo set out to make 2009 a new era for his racing career, upgrading to the Crossplane crankshaft YZR-M1, switching management, and changing his longtime number 48 to 99. Despite these changes the wall will be staying between him and Rossi. 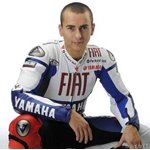