John Isner is an American professional tennis player. He achieved his career-high singles ranking of World No. 9 on March 19, 2012, and is currently the highest-ranked male American tennis player. His most famous victories were against Roger Federer in the Davis Cup encounter in February 2012, top seed Novak Djokovic at the 2012 Masters 1000 tournament in Indian Wells, Andy Roddick in the 2009 US Open, and against Nicolas Mahut at the 2010 Wimbledon Championships where he played the longest ever professional tennis match, which lasted 11 hours and 5 minutes over the course of three days.

He won his first tournament of the fall, the USA F14 Futures, beating the top three seeds along the way. Then, after first round losses in a Challenger-level and an ATP-level tournament, he beat five top-300 players and three seeds to win the Lexington Challenger in July to improve his ranking to no. 416 after just one month. At the following week's tournament at the Legg Mason Tennis Classic in Washington, D.C., Fernando González's late withdrawal freed a wildcard spot, which was given at the last minute to Isner. Isner took full advantage of his good fortune, recording his first wins over top-100 players. He won third-set tiebreakers on five consecutive days, beating no. 73 Tim Henman, no. 47 Benjamin Becker, no. 189 qualifier Wayne Odesnik, no. 12 Tommy Haas, and no. 54 Gael Monfils, to reach the final, where he fell to fellow American Andy Roddick. His incredible week raised his ranking to no. 193 in the world after just six weeks on the pro tour. Isner began the year at the 2010 Heineken Open in Auckland. Unseeded, he reached his second career ATP final and first since Washington in 2007. In the final, he saved a championship point to defeat 2001 Australian Open finalist Arnaud Clément. The victory in Auckland was Isner's first ATP tour title; after the victory he donated $5,000 of his winnings to aid rescue action for the 2010 Haiti earthquake.

Isner next took a last-minute wild card to participate in the 2011 Hall of Fame Tennis Championships, replacing compatriot and defending champion Mardy Fish, who was chosen to play in the Davis Cup for the United States during the that weekend. Isner was the top seed and defeated Karol Beck, 2001 Australian Open finalist Arnaud Clement, Alex Bogomolov, Jr., and Tobias Kamke without dropping a set, to reach his first career grass-court final. In the final, he defeated Olivier Rochus to become the first top seed in 35 years to win the event. The title was his first of 2011 and second of his career, raising his record in ATP finals to 2–0 against non-Americans, and ending a three-match losing streak in finals. The championship raised Isner's world ranking from no. 48 to no. 36. 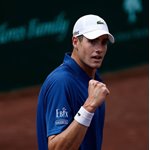 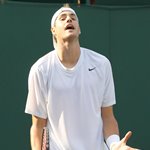 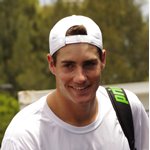 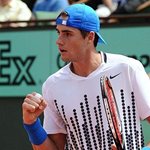 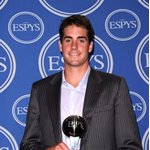 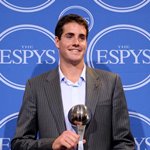 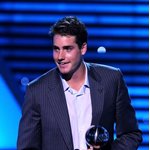 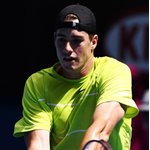 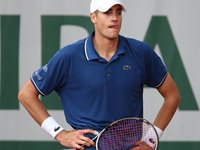 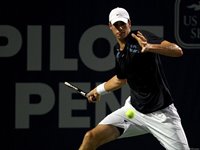