''John Ekwugha Amaechi''' (born November 26, 1970 in Boston, Massachusetts) is an former NBA basketball player who currently works as a broadcaster in England.

The son of a Nigerian father, he was raised in Manchester, England by his English mother. Amaechi moved to the U.S. to play high school basketball at St. John's High School in Toledo, Ohio. He began playing college basketball at Vanderbilt but transferred to Penn State where he was a two-time First Team Academic All-American selection.

The 6' 10", 270 lbs center was signed undrafted by the Cleveland Cavaliers in 1995. He played 28 games for the Cavaliers during the 1995-1996 season, then played for three years in Europe (France: Cholet, Limoges; Italy: Kinder Bologna; Greece: Panathinaikos; England: Sheffield Sharks) before signing with the Orlando Magic in 1999. With a solid 1999-2000 season, where he averaged 10.5 points in 21.1 minutes per contest, he gained fame for scoring the NBA's first points of the new millennium in 2000. Amaechi went on to play for the Utah Jazz from 2001 to 2003.

He was traded to the Houston Rockets midway through his final NBA season in exchange for Glen Rice.

Amaechi came out of retirement to represent England during the Commonwealth Games in Melbourne, helping the England national basketball team win the Bronze medal, and can also be seen covering a weekly NBA basketball game aired in the UK on the television channel "Five".
John was the only Englishman to play in the NBA and has set up the Amaechi Centre for kids non national and national basketball clubs. 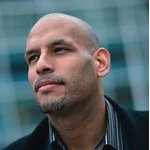