Jimmy Rollins is an All-Star and former MVP shortstop, who plays for the Philadelphia Phillies of Major League Baseball's National League. Though Rollins has developed into a five-tool player during his career due to significant increases in his power hitting, he is perhaps best known for his baserunning skills. He stole at least 20 bases every season from 2001 to 2009, with a career high of 47 in 2008.

In this respect, Rollins emulates his childhood baseball hero, Rickey Henderson. After being drafted by the Phillies in the second round of the 1996 draft, Rollins was assigned to the rookie-league Martinsville Phillies. He led the team in walks, batting only .238, but stealing 20 bases. However, he still earned a promotion to low-A Piedmont for the 1997 season. He had a better year at only 18 years old, leading the team in games played, at-bats, runs, hits, triples, stolen bases, and walks all in the same year. He batted .270, stole 46 bases, and had 560 at-bats, more than 100 higher than second-place Dave Francia. In 2002, Rollins finished second among NL shortstops with a .980 fielding percentage, third in total chances (695), fourth in assists, (504) and fifth in putouts (226), while posting a .245 batting average. He led all NL shortstops in stolen bases and finished third in runs (82), fourth in hits (156) and walks (53) and fifth in doubles (33) and RBI (60). He was voted the starting shortstop for the NL All-Star team, and became the first shortstop in Major League history and first Philly to make the All-Star team in his first two Major League seasons. He was named Best Defensive Shortstop in the NL and third-best NL Baserunner by Baseball America. He also participated in the MLB vs Japan All-Star Series in November in Japan. Rollins was selected as the shortstop on the MLB Insiders Club Magazine All-Postseason Team.

On December 17, 2011, Rollins signed a three-year, $33 million deal with a vesting option for a fourth year, worth another $11 million. If the option does not vest, the option can become a team option for $8 million or a player option for $5 million. Rollins was named the 2007 National League Most Valuable Player, and has been named to the National League All-Star team three times (2001, 2002, 2005). He also became the first player in the history of Major League Baseball to collect at least 200 hits, 15 triples, 25 homers, and 25 stolen bases in one season, and holds the record for most at bats in a season with 716. On September 4th, 2012, while batting against Cincinnati Reds' pitcher Mat Latos, Rollins hit a high chopper down the 1st base line for his 2,000 career hit. 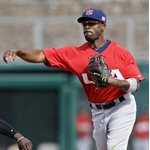 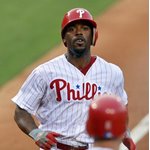 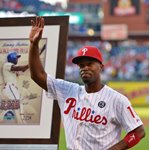 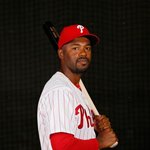 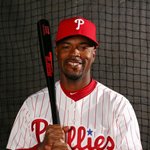 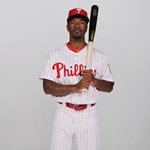 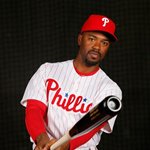 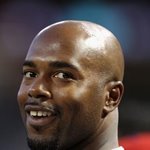