Gaudy statistics drew pro scouts to Jerry Rice when he played for obscure Mississippi Valley State. His pass-catching skills sold them on his potential. His MVP performance in the Blue-Gray all-star game sealed the analysis: Rice was worth a first-round draft pick.

However, most National Football League teams, renowned for attention to detail, didn't think so. Most didn't have Rice at the top of their draft lists, didn't even rate him as the best wide receiver.

The 49ers merely latched on to the most prolific pass receiver in NFL history. The first player to score 200 touchdowns, Rice is also the NFL's career leader in receptions, yards receiving, yards from scrimmage, all-purpose yards, touchdown receptions and consecutive games with at least one catch.

A Super Bowl MVP, he has been invited to the Pro Bowl 13 times. Its no wonder Rice ranks at the top as one of the best all time NFL receivers as well as being considered by many to be one of the greatest NFL players of all time.

Jerry Rice grew up outside the little rural town of Crawford, Miss. His father was a bricklayer whose sons helped him with his job in the summer by tossing and catching bricks on a scaffold. "It taught me the meaning of hard work," Rice said. As a child, Rice ran endlessly on the dirt road in front of his house, soaking himself in the oppressive Mississippi heat, years before he discovered football.

He found football at B.L. Moor High School and became a Division I-AA All-American receiver for "Gunslinger" Cooley at Mississippi Valley. Rice, then known as "World" once caught 24 passes in a game to set an NCAA all-division record. "Just beautiful," said Gloster Richardson, a former NFL wideout and Rice's receiving coach in college. "Real soft, real quiet, always right on time. He doesn't need to use his body to catch the ball. His hands are just a gift." He finished his college career with 18 Division I-AA records. "He can catch a BB on a dead run at night" Cooley once said.

In 1985, breaking in as an NFL rookie, Rice admitted he was scared and dropped the ball more than usual. "I was thinking through every step of a complicated offense," he said, "instead of using natural reactions." San Francisco coach Bill Walsh stuck with him, and a 10-catch, 241-yard game against the Los Angeles Rams in December put him on course.

The next year Rice led the league with 1,570 yards and 15 touchdown receptions and had 86 catches. In 1987, he was the NFL's Player of the Year when he scored a league-high 23 touchdowns, including at least one in all 12 non-strike games. The following season he was MVP of Super Bowl XXIII with 11 catches and 215 yards as the 49ers beat the Cincinnati Bengals 20-16.

Talent and obsession: Rice blended them into a feared package. His 4.5-second speed for 40 yards, moderate for the pros, proved to be misleading. Rice, 6-foot-2 and 205 pounds, had brilliant game speed, breakaway speed, which made him the deep threat the 49ers wanted.

He also made the important third-down receptions, often turning short routes into big gains. "He has the knack of knowing when to break, when to use his speed," said Joe Montana, who threw 55 touchdown passes to Rice.

Rice could cut like no other receiver, explosively at full blast, which put cornerbacks on their heels. He could outjump defenders to balls. And his hands -- big and toughened by his early bricklaying days and yet sensitive -- were incomparable.

Rice wouldn't rely on physical gifts alone, a characteristic that went back to his hard-working childhood. Meticulous almost to the point of fixation, he catalogued the tendencies of defensive backs, played practice drills as if they were games, and built a strict health-food diet and conditioning regimen.

Until sitting out 14 games in 1997 because of two serious knee injuries, Rice had never missed a game at any level, a span of 19 seasons. He played 189 consecutive non-strike NFL games, some of them hurt. He played the 1995 Super Bowl against the San Diego Chargers with a strained shoulder, a first-quarter injury, and caught 10 passes, three for touchdowns.

In 1992, he broke Steve Largent's touchdown reception record with his 101st. In 1994, he passed Jim Brown to become the league's all-time touchdown leader with 127. The following season, he broke Charlie Hennigan's 34-year-old record for single-season receiving yards (1,746) with 1,848. He also set the career receiving yardage record that year, going to 14,040 yards with a 108-yard day against the Saints.

In 1998, the year after his knee injuries, Rice combined with quarterback Steve Young to become the NFL's all-time top scoring duo with 80 touchdown passes as well as breaking Art Monk's record of 183 consecutive games with a reception.

In June 2001 the 49ers released Rice because of salary-cap problems. The Oakland Raiders signed him and Rice responded by having his 13th and 14th 1,000-yard receiving seasons, gaining 1,139 on 83 catches with nine touchdowns in 2001 and 1,211 yards on 92 receptions with seven TDs the next year.

"That means he gets himself open, even against triple team coverage," said Young, who threw 85 TD passes to Rice. "Think about it, through generations of defenses, he's still getting open." 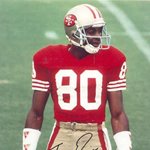