The reigning Royal Highness of the women’s pole vault, Jenn Stuczynski won her first career national title at the 2005 USA Indoor Championships at the Reggie Lewis Track & Athletic Center. In Boston this weekend at the 2009 edition of the meet, she’s looking for her fourth indoor national title, seventh national title overall and possibly another American record at what has proven to be one of her favorite venues.

When Stucyznski won the women’s vault at the 2005 USA Indoor Championships with a clearance of 4.35m/14-3.25, her coach had to tell announcers who she was and how to pronounce her name. (It’s Stuh-ZINN-ski). A basketball player at tiny Roberts Wesleyan college in Rochester, N.Y., the nearly 6-foot-tall Stuczynski was discovered by vaulting coach Rick Suhr, whose enclave of vaulters in upstate New York was famous for practicing in an unheated Quonset hut. 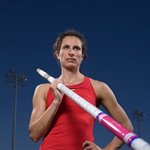