Action film star Gary Daniels was a real-life kick-boxing champion. With rugged good-looks, a muscular build and a charming personality, it was a natural for him to move from the world of fighting to that of acting.

Born Gary Edward Daniels on May 9, 1963 in Working, Surrey, England, Daniels was a childhood fan of legendary martial arts film star Bruce Lee. He followed his idol by studying Kung Fu. Demonstrating a natural ability for the sport of full-contact karate (also known as kick-boxing), Daniels embarked on a ring career with the dream of winning a world title. Fighting in tournaments in England, Daniels' aggressive ring style made him a fan favorite, but did not sit well with the British officials. Even though he scored all 12 of his wins by knockout, his 3 defeats were by disqualification.

Gary decided that his best bet was to fight in the United States, so he traveled to Florida and began competing there. In 1980, Daniels made his United States debut at the Sunshine State Tournament in Miami. In his opening match, Daniels defeated local favorite 'Sherman 'Big Train' Bergman', who a year earlier had lost to Jean-Claude Van Dammeat the World Full-Contact Championships. However, in his next fight, Daniels was eliminated from the tournament after he lost a 3 round decision.

The sport of kick-boxing was taking off in Southern California, and Gary Daniels decided to leave Florida and continue his career in California. He soon established himself as a top contender for the world title. He appeared in numerous martial arts magazines, and his knockout streak continued to grow. Soon after winning the PKA (Professional Karate Association) Lightheavyweight Kickboxing Championship, Daniels decided to retire from active competition. It was 1993, and Daniels ended his fighting days with a 22-4 (21 knockouts) record.

His ring fame helped land him small roles in the hit television series, Miami Vice. Daniels later traveled to the Philippines to make martial arts films. From there Gary went into mainstream film-making; acting in over 45 movies, as well as producing some of his own motion pictures. 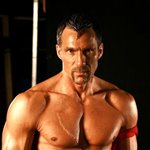