Félicité Wouassi (b.May 1961) , is a French actress of Cameroonian origin. She was born in Yaoundé, Cameroun, brought up in Liberia. Her parents came to Paris in 1973. Whilst studying, as a teenager, she also did recordings for RFI and France Culture.

Whilst acting in a theatre in a piece called "Je soussigné cardiaque" produced by the Congolese writer Sony Labou-Tansi , directed by Gabriel Garand. Thomas Gilou proposed her the role of Anisette in Black-Mic-Mac. In 1986, she acted in Black Mic-Mac 2 (1988) directed by Marco Pauly , Tabataba (1991 by Francois Koltes, The Journal of Lady M. (1993), by Alain Tanner.

Mathieu Kassovitz gave her a small role in Metisse (1993). A year later, she had a role in Rue Princesse by Henri Duparc, and worked again with Kassovitz in his films La Haine (1995) and Assassin(s) (1997). She also played in Le Battement d'ailes du papillon (2000) by Laurent Firode. 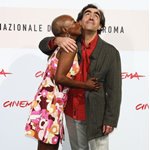