Vincent Martella began dancing at the age of 3, and delivered his first live performance in The Nutcracker. He began playing the piano at 5. Not long after, Martella was performing in school plays and appearing in local commercial spots. At 6, he began acting and vocal training. By age 7, he was one of the hottest kids in the Central Florida market, working both print and national commercials. By age 10, it became clear that Martella was ready for Los Angeles. During his first trip to LA, he landed a guest spot on Fox's Cracking Up and a recurring role on Nickelodeon's Ned's Declassified where he developed his own character for the role of Scoop. The following summer, Vincent nabbed his first film role working opposite Rob Schneider in Deuce Bigelow: European Gigolo. Since then, Vincent has guest starred on the Fox comedy Stacked, starring Pamela Anderson, and lent his voice to the feature film Bad News Bears.

Martella's voice will also be heard in the new Disney pilots Can You Dig It, as well as in Phineas and Ferb as the title character of Phineas. Phineas and Ferb has been picked up for a full season on the Disney Channel in 2007.

Currently, Martella is busy gearing up to reprise his role in the third season of "Everybody Hates Chris" and shooting Universal's "Little Big Men" opposite Seann William Scott and Paul Rudd.

Martella is very passionate about performing, whether it be singing, dancing or acting. His new album, Time Flies By is available for download on I Tunes. The young thespian is also known for his quick wit and impersonations. Though he is in Los Angeles most of the year, he lives in Florida with his mother, father and three siblings. 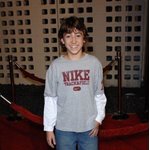