Born in Santa Barbara, Victoria Fuller is a true California girl. Victoria’s artistic life began early. Coming from three generations of artists on each side of her family, her artistic future was destined. Her great, great grandfather exhibited art in Glasgow Institute of Fine Art and the Royal Academy, just to name a few.

Victoria’s mother noticed her talents early on. When Victoria was only two years old she shocked her parents when she started sketching Snoopy cartoons right off the funny page with crayons. She could draw before she could talk.

Throughout high school, Victoria was driven to take every art class she could. It was there a special art teacher would become the early mentor who would nurture her spark by secretly entering her work in a major art competition in hopes of boosting her confidence. Victoria won first place. Now out of high school, Victoria began the life of a fitness model alternating between the gym by day and art classes by night. It wasn’t long before she committed herself solely to her true love. She picked up her brushes and set out to get a formal art education. While in college, recognition for her talents came early. Just a couple of years along, Victoria was commissioned in the community to paint the most beloved members of their families... the four legged ones.

Her other area of focus was nude portraits. She spent many hours perfecting the lines of the human body. Little did she know she would soon become the subject of someone else’s art in the famed pages of Playboy magazine as Miss January 1996.

Playboy discovered Victoria on a modeling shoot and quickly signed her on as a Playmate Centerfold. The theme of the pictorial was none other then art and becoming an artist. Since her centerfold she has traveled the world modeling and making appearances.

As if being one of Playboy’s most popular Playmates, as well as one of the most videoed and photographed Bunnies in the last 50 years, Victoria has made history again by being the only artist to receive permission from Playboy to use their famous trademarks in artwork. She has been granted a licensing contract from Playboy to feature the Playboy name, Rabbit Head logo and Bunny costumes as the subjects of her paintings and limited edition artwork prints.

“It’s so amazing to be able to say I have the love and support of a billion dollar company behind me. What other artist has even been able to say that? I’m very honored,” says Victoria.

This was just the boost Victoria needed for her blossoming art career. Playboy is renowned for their involvement, support and foresight in the art world. Many famous artists got their start in the pages of Playboy, including Leroy Neiman and Alberto Vargas. Now a member of the Playboy family, Victoria is using this opportunity to spark a great career as a dominating female force in Pop art.

“All of my work is a retrospective of my first hand look at being a Playmate, and my view on Playboy as one of the leading icons of our time. The brilliance of Hugh Hefner has challenged and inspired me to do something great.

“I love Pop art because it makes the viewer question, what’s real and what’s fantasy.”

Although painting is her main focus, Victoria continues to work with Playboy modeling and making appearances. Having traveled the world over Victoria has another adventure under her belt, “The Amazing Race 6.”This double Emmy award winning reality show will push her limits. 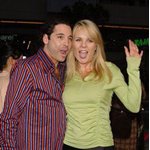 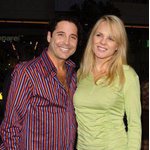 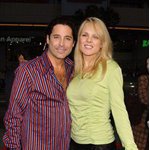