Trevor Blumas was born and raised in London, Ontario, Canada, and in his elementary years, attended the Lester B. Pearson School for the Arts, where he studied music, dance, drama, and art. Trevor performed in the Original Kids Theatre Company in London, Ontario, Canada, and has been in many stage productions, including, "Annie Warbucks," "My Fair Lady," "How To Eat Like A Child" with his sister Jaclyn, and "Casey" as Young Michael. Trevor has also studied and participated in workshops at the prestigious world-renowned Shakespearean Stratford Festival in Southern Ontario.

He went on to appear as a guest star in several television series, and has starred in feature film, television movies, and television series, opposite such stars as Edward James Olmos, Harry Hamlin, Teri Hatcher, Rob Lowe, Andy Garcia, and Mercedes Ruehl. Attended Lucas High School in London, Ontario, when not on the road working at acting which he often was during his high school years.

Trevor loves acting, has once dreamed of being an astronomer, has expressed an interest in life on other worlds, and has said that his favorite movie was "Beetlejuice," a comedy about life after death. Besides acting, he can play the violin, keyboards, and wind instruments, also plays guitar, writes music, sings, and played in a London-based band with his friends. Apart from the arts, Trevor loves football, plays golf and tennis, snowboards and surfs, and has raced "Mackenzie Silver Level" in skiing. 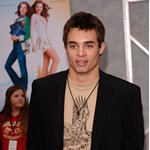