Lean, ruggedly handsome leading man and supporting actor whose "outdoor" looks have improved with age, Tom Skerritt attended Wayne State University and UCLA, and was first noticed in a UCLA production of "The Rainmaker" before making his movie debut in War Hunt (1962). However, he spent most of the next decade in television, regularly appearing in "Combat!" (1962), "The Virginian" (1962), "Gunsmoke" (1955) and "12 O'Clock High" (1964). Skerritt's next big break was appearing alongside Donald Sutherland and Elliott Gould in Robert Altman's biting satire MASH (1970). Several other film roles quickly followed, before he landed the plum role of Capt. Dallas of the ill-fated commercial towing vehicle Nostromo in the creepy sci-fi epic Alien (1979).

Skerritt turned up again in another thriller playing a cop hunting a serial killer in the eerie The Dead Zone (1983), as a Navy Officer Flight instructor in Top Gun (1986) , in the six-chick flick Steel Magnolias (1989), and then as the poster boy for a "Guess" Jeans ad campaign utilizing his mature, weather-beaten features. Skerritt didn't neglect his TV background and reappeared on the small screen in "Cheers" (1982), The China Lake Murders (1990) (TV) and picked up an Emmy in 1994 for his performance as Sheriff Brock in the superb series "Picket Fences" (1992).

Skerritt has remained continually busy for the past decade, contributing natural, entertaining and reliable performances in TV series, made-for-TV movies and major theatrical releases. He recreated the role of Will Kane in the TV production of High Noon (2000) (TV), and appeared alongside Bruce Willis in the mercenary war drama Tears of the Sun (2003). 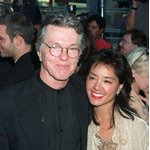