Thad Luckinbill joined the cast of The Young and the Restless as J.T. Hellstrom in November 2000, though he was not put on contract until November 2002.

Thad was born and raised in Enid, OK. He attended the University of Oklahoma where he majored in business finance.

When Thad is not working, he enjoys playing basketball, surfing, boxing and going to the gym. 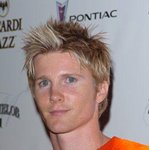