Daniels is an only child whose parents were divorced when she was four. She was subsequently raised by her mother. Daniels attended a magnet school in Louisiana and was the editor of her high school paper and president of the 4-H club..

She began stripping at age 17 at a club in Baton Rouge then expanded to become a feature performer in September of 2000. While working as a feature she met with Devon Michaels, who was doing girl-girl scenes in a pair of upcoming movies-one for Wicked Pictures and one for Sin City, and invited Daniels to accompany her. Daniels accompanied Michaels to her Wicked shoot, where she met Brad Armstrong and co-starred with Michaels in her Sin City scene, which was "American Girls Part 2". Afterwards, Armstrong invited Daniels to stay out with him where she continued doing girl-girl only scenes.

Appeared in an episode of Real Sex were she is seen participating in 2001 Miss Nude Great Plains Contest.

She has appeared in several popular men's magazines including "Playboy", "Hustler", "Penthouse", "High Society", "GQ", and "FHM". She has also written for "FHM".

In early-2007, she appeared in "Dirt" on the FX Network, where she played a stripper who helps to set up a basketball player played by Rick Fox. Later in 2007, Daniels appeared in Maroon 5's music video for their song Wake Up Call as a pole dancer. 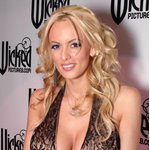