Steve Wilder was born in Cooperstown, NY and raised by his mother, Sylvia, at the family home on Otsego Lake. He graduated high school at the age of 14 and, although was fairly certain even then that he wanted to pursue a career in acting, he explored many options, which included touring on the professional tennis circuit, and teaching and competing at freestyle mogul skiing.

Professionally, Steve has studied with renowned Los Angeles coaches Roy London, Ivana Chubbuck and Cameron Thor as well as at the Actor’s Studio annex in Florida. Although he has performed extensively on stage in New York, London and Los Angeles, as well as in many independent films, he is still most recognized for his work in Television as dynamic hero “Jack Devereaux” on NBC’s “Days of Our Lives”, and the conniving “Alex Bastion” on FOX’s “Melrose Place”.

Although Steve’s first love is acting, he has also branched into writing and directing, and has started a production company, Talisman Productions (www.talismanproductions.com), dedicated to producing inspiring, thought provoking and entertaining independent films.

True to his business card, which reads “Actor, Pilot, Adventurer!”, Steve is a commercially rated pilot of both planes and helicopters, has skipperred sail boats on the Southern and Northeastern race circuit, is an expert slalom water skier and has a black belt in Tae Kwon Do. He enjoys motorcycles, hiking, mountaineering, SCUBA diving, and anything to do with helping animals. Steve resides in Los Angeles, and New York. 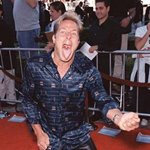