My childhood was Huckleberry Finn in Manhattan. My Mississippi was Central Park. My raft was my skateboard. And my Jim was the songs in my soul that I was someday going to write. The Tom Sawyers came and went, eventually, to Princeton, Harvard or Yale.

At 14, I met an African drummer who taught me all sorts of African and Brazilian instruments, songs and dances. He took me to Black Orpheus and the National Dance Ballet of Senegal. He took me uptown to Mickels to hear Art Blakey and Max Roach, and downtown to Tramps at four in the morning to hear Big Joe Turner sing the way-blue blues.

My sister wanted to kill me because when I was home I was practicing drums, drums and more drums, and when I wasn't home--during the overlapping wee hours--I was experiencing the mystic bliss of love, life, music and tequila sunrise.

I never saw my friends again. I began to find a new family in the sensual world of cocoa butter, lanolin and goat skins soaking in the bathtub. I only wanted to play music, which began to branch out into jazz, vibraphone and classical marimba. Milt Jackson became my hero.

I showed up for one class during my junior and half a senior year at Trinity High School and that was English Literature with Miss France. Mr. Herland, my history teacher, said I could make it into Harvard and should, but I wanted to go to the Manhattan School of Music. So I did.

I stayed a year at the Manhattan School of Music and absolutely loved it. I majored, of course, in percussion. I was also playing drums in a couple of bands, one of which I particularly dug called the "Pink Men," and I finally began to write those songs I had always meant to.

I sung them from behind the drum set in bars like the Blue Hose Cafe, Kenny's Castaways and all those other dives, until one night a guy came up to me and asked if I wanted to record them in his home studio on Seventh Street and Avenue D. And I did. He gave me the keys to his house, a brief technical lesson, and let me work alone in his studio while he drove his cab on the graveyard shift. I showed up after midnight and left before six a.m., our gossamer paths never crossing, until I had completed a 50 song demo tape. Somewhere in all of this I had loved, lost and left music school.

Many bands and instruments later, I found myself acting in off-off Broadway plays, writing and performing music for established artists on the raw, exotic irreverent downtown scene, playing drums for dance classes at NYU and working as a coat check at Orso on 46th Street. I was very happy.

One night a guy waltzes in and I check his coat. He likes my voice. He asks if I can sing and I say 'yes,' pulling out my tattered demo tape. He takes it, sincerely, and tells me his name is Marc Cohn.

Next thing, I get a call to come down and sing a jingle for Nestle White Chocolate-it's called appropriately "Sweet Dreams." I get a hunger check in the mail than I ever knew existed, I get residuals, I get in the union, and I get another call.

It's Bryan Ferry from London. I had never been further away from NYC then Cape Cod. He wants me to audition for his upcoming tour, and my demo tape is playing in the background of his limousine. It's a song called "Meet Me On The Rooftop." What does he want me to play on this damn tour? Maybe percussion, some drums, how about singing a few backgrounds?

I run out and get all of his other albums--I only had Avalon--and arrange vibraphone and marimba parts for all of his songs, figuring that's going to be my most original contribution. I spend 12 hours a day practicing for this gig. I show up in a Laura Ashley dress with my hair up and he tells Andy Newmark that I remind him of Maggie Thatcher.

He keeps me on for two months, gives me a bonus, then politely fires me. I get another call.

It's Ralph, he grabbed my tape from the jingle house and heard "Damn, I Wish I Was Your Lover" on his Walkman while riding the F train to Brooklyn. He thinks I should get a record deal. He thinks he can help. He does.

I sign to Columbia and make a record, and then another, and now this one, Timbre, which I produced as well as the usual written-and-performed by. I'm proud of this record, very proud. I fought hard and long to be able to express my musical vision this clearly and purely, and I'm more excited than ever about my path as a musician, writer, visual artist and force of nature.

I'm learning to play the cello now and working on a novel. I moved to California. My friend Gigi made a documentary about me which is doing very well. We're working on another movie (Beyond City Limits). I'm also studying Hebrew, but I'm not part of the Kabala clique in this town--I'd rather read it on my own.

This album is dedicated to a social cause (environmental groups around the world), and that makes me happy to promote it. A percentage of sales is going to this cause. YAY. 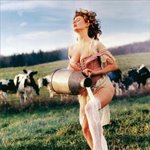