Sondra Locke was plucked from her small hometown of Shelbyville, Tennessee, when at the age of 20, she was discovered by Hollywood in a nationwide talent search and chosen over thousands of girls for a starring role in the Warner Bros. film version of Carson McCullers' The Heart is a Lonely Hunter. Her performance in that film was praised by critics everywhere and she was ultimately nominated for an Academy Award.

Before filming, she married Gordon Anderson, her high school sweetheart, who had played a major role in the unusual and entertaining story of her "discovery.: Although Gordon ultimately realized that he was gay, their unique and powerful bond remains to this day.

In 1975, Locke was cast by Clint Eastwood as the love interest in his film "The Outlaw Josey Wales." Immediately, she because his leading lady both on screen and off. During the course of their thirteen year relationship, Locke starred alongside him in several films, including "The Outlaw Josey Wales," "The Gauntlet," "Any Which Way You Can," and "Sudden Impact."

During her many years with Eastwood, Locke also became one of the first women directors in Hollywood. Her first film was the off-beat and quirky "Ratboy" (in which she also starred, along with Robert Townsend). It was praised at film festivals and much admired by many critics.

Her second film, "Impulse," starred Theresa Russell, and received "two thumbs up" from Siskel and Ebert, who proclaimed it "the best directed film [they had]seen in a long time."

The beginning of Locke's directorial career seemed to mark the end of her long personal life with Eastwood. Their split-up was headline grabbing and ugly. Locke fought back with the only weapon she had, and filed a lawsuit against him.

After an eighteen month stand-off, Eastwood eventually settled with her, but the most important aspect of the settlement (a contract to direct films with Warner Bros.) turned out to be false, and Locke was forced to fight again. She filed suit against Eastwood and Warner Bros., and again made headlines when the trial against Eastwood ended in her favor. Her separate lawsuit against Warner Bros. is expected to go to trial in early 1998.

In 1990, Locke was diagnosed with breast cancer. But she fought this too, heart and soul, and with the love and support of the few friends who remained close to her, and with what she describes as "help from God" she is now cancer free.

During treatment, she miraculously met a new love, a surgeon, and is now happily living with him. She is currently at work preparing her next film. 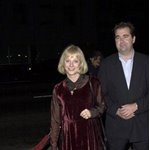