With a distinguishable laugh and huge smile, Seth Adkins continues to make his mark on the Hollywood scene. From being abducted by his father in the critically acclaimed "When Andrew Came Home," having seizures while in the arms of Meryl Streep in "First Do No Harm," becoming a real boy as Pinocchio in the delightful "Geppetto," to going down with the ship in "Titanic," are just a few of the diverse roles that sixteen year old Seth Adkins has played.

At an early age and with the support of his parents, Seth followed his older brother into the acting profession. "I found out how much fun it was and how many different people I could play," says Seth. After appearing in episodes of "ER" and "Sabrina, the Teenage Witch," he was cast in the feature film "Stir", playing a young boy who develops a strange sixth sense connection with a deceased person.

Seth went on to play a lead role in the 1997 blockbuster "Titanic" with Leonardo DiCaprio and Kate Winslet. He's remembered as the boy with the suitcase in the hallway who is rescued by Jack Dawson only to be pulled away by his father and presumably drown. "The sound stages we filmed on were really big. I got to take a tour of all of them. Leonardo and Kate were a lot of fun to play with between takes."

Seth showed his light-hearted side in the comedy spoof "Mafia!" and "Pirates of the Plain" in which he plays a boy with a hyperactive imagination, leading him on great adventures. "I really liked working with Jim Abrams again. I also got to do my own stunts in both "Mafia" and "Pirates of the Plain." The hardest stunt I did was in "Mafia," when I hit my head on the door frame and fell backward while I was on my father's shoulders."

Seth's appearance in "First Do No Harm" won fans' hearts with his realistic performance of a boy with epilepsy. This true story dealt with a mother's frustration with the medical professional and a doctor's reluctance to try an alternative treatment to save her son's life. Seth’s mother, who previously worked with handicapped children, helped Seth prepare for the role along with Mary McCusker. He also viewed films of children having seizures to portray his character realistically. "Epilepsy is a very difficult disease to live with. I hope that maybe some children and their parents will learn about the Ketogentic Diet and the children will be able to get off the medication and become seizure-free."

In the movie of the week, "When Andrew Came Home," Seth played a young boy returning to his mother after being previously kidnapped and abused by his father for several years. Seth gave a strong performance, demonstrating his powerful acting abilities, making this film come alive. "I met with a child therapist who worked with children like Andrew" said Seth. "It was a very emotional role for me and I wanted to convey Andrew’s sadness."

Seth can be seen in many leading roles, including one of his more recent made for television movies "Geppetto," a remake of the famous Disney animated feature where Seth plays Pinocchio and Drew Carey plays Geppetto. "It was a difficult role to play since I had to spend almost three hours a day putting on the make-up and wardrobe. The costume was extremely hot and heavy since it was made out of rubber and covered my arms at legs," explains Seth.

Seth recently completed the feature film "Funky Monkey," taking him to Nice, France for several months. The film is a story about a young boy and his adventures with a chimp and Jack McCall, a man who is caring for the chimp and befriends the boy. Seth is playing the lead role of Michael Dean along with Matthew Modine as Jack McCall and Roma Downey as Megan Dean, Michael's mother.

Seth lives in the Los Angeles area with his parents (his father is a principal and his mother, a former teacher) and two older brothers Zachary and Josh.

Seth stays in contact with his fans via his website at: www.sethadkins.net. "It’s great to hear from people; I enjoy reading and answering my fan mail."

For the last several years, Seth has participated in the Kids With a Cause events, a wonderful organization which pairs young actors with children who have special needs. The organization headed by Linda Finnigan, also raises funds and provides some special items to needy organizations. Seth loves being a member of Kids With A Cause.

Seth sang in the movie, "Geppetto," and is currently the voice of Pinocchio for Disney Character Voices. He is continuing to develop his talent in singing.

Outside of acting, Seth is a regular kid who keeps himself busy, playing on a Boys and Girls Club basketball team, playing a round of golf with his father, or just hanging out with friends. Looking towards the future, he aspires to continue acting and may even try his hand at directing. 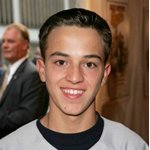 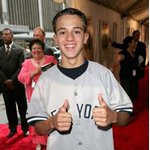