The youngest of four sons of actor John Carradine, Robert Carradine has followed his brothers Keith and Bruce and half-brother David into the performing trade. Robert made his film bow as a teenager in 1972's The Cowboys, playing juvenile leads until his facial features matured into those of a young character actor. He appeared with his brothers in the 1982 western The Long Riders, which co-starred such show-biz siblings as the Keaches (Stacy and James) and the Quaids (Randy and Dennis). 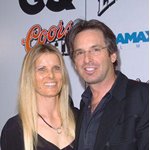