Priscilla Barnes (born in Fort Dix, New Jersey on December 7, 1955) is an American actress best known for replacing Suzanne Somers (Jenilee Harrison having stepped in the season before) when the contract of Somers was not renewed on the show Three's Company. On that series, she portrayed Terri Alden, an intelligent nurse who seemed to be the show's answer to complaints about their portrayal of blondes. Barnes had previously auditioned for the part of Cindy Snow, but was turned down because she was deemed "too old" for the part.

Before she made it big on Three's Company, Barnes was a beauty pageant contestant. During her teens, aspired to be a dancer. During a Hollywood Bowl performance, she fell off the stage, fracturing her jaw and breaking her leg, and putting a lid on her dancing career. Barnes eventually turned to acting and appeared on TV shows such as Starsky and Hutch, The Rockford Files and The Love Boat.

Being cast as Terri Alden on Three's Company brought Barnes instant public recognition, something she said she never really cared for. In 1998, on the show, E! True Hollywood Story, she called Three's Company the "three worst years" of her life, even though she became lifelong friends with castmate Joyce DeWitt and she does have some favorite episodes of the show. Barnes revealed that after shooting a couple of episodes of the show, she felt "uncomfortable" on the set and asked to be released from her contract. When she turned down the producers' offer to pay her more money as an incentive to stay, she claimed they penalized her with a lower salary.

In any case, Barnes stuck on with the show in spite of her disagreements with the producers. She also claimed the show typecast her as a comedy actress whereas before Three's Company, she was "up for anything".

Barnes has many film credits to her name as well as extensive experience on stage, notably appearing in the James Bond film Licence to Kill, as ill-fated bride Della Churchill, as well as the three-nippled fortune teller in Kevin Smith's Mallrats. In the 2005 Rob Zombie movie, The Devil's Rejects, she played Gloria Sullivan.

Prior to fame she appeared in Penthouse (March 1976) under the false name Joann Witty. Barnes later sued the magazine when they republished her photo using her real name. In her personal life, she has been married to actor Ted Monte since 2003. 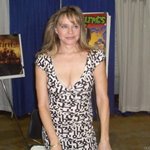