Priscilla Ahn had her start during her time at Tulpehocken Area High School, playing coffee houses and open mikes in the Bernville, Reading, and Philadelphia, Pennsylvania area. She was advised by a college music professor, who recognized her skills, to pursue a songwriting career instead of going to college, so she moved to Los Angeles about a year after graduating from high school.

After moving to Los Angeles, Priscilla Ahn toured with Joshua Radin, Amos Lee, and Ray Lamontagne sang on Amos Lee's album Supply and Demand, performed her song "Dream" on The Tonight Show with Jay Leno.[1] Two of her songs were also featured on two episodes of Grey's Anatomy.[2][3] "Dream" was also featured on the soundtrack to the movie Disturbia,[4] and more recently on an episode from Ghost Whisperer as well as the episode of the BBC's "Holby City", broadcast on 04 August 2009.[5] In June 2008, she was the Artist of the Week for Paste magazine.[6] Her song "I Don't Think So" was featured at the end of NBC's Knight Rider premiere episode.

In 2009, her single "Dream" was featured in the film Bride Wars and a brief clip of "A Good Day (Morning Song)" can be heard at the end of the Psych episode, "Tuesday the Seventeenth." The song dream also featured on episode 22 of the third season of ABC's hit show Brothers and Sisters that aired in May 2009 and appeared in episode 21 of Eli Stone. The song "Living In A Tree" is featured in the 2009 Jeep Wrangler commercial for the Dodge Chrysler "We Build" campaign. She is also featured in "I Am Strong" on Tiesto's 2009 album Kaleidoscope.

In 2009, her single "Dream" was also featured in the film Love Happens starring Jennifer Aniston and Aaron Eckhart.

In 2010, The Single "Dreams" was used at the end of the third episode of season three in the British TV series Secret Diary of a Call Girl starring Billie Piper. Also, her song "Find My Way Back Home" was used as the title in the ITV drama Married Single Other. 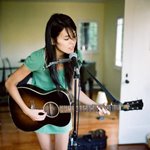