Pilar Abella was born in 1980 in Lugo, Galicia, Spain and she is a famous actress and daughter of painter Pilar de Aristegui and diplomatic Carlos Abella. 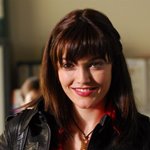