Persia Jessica White was born on October 25, 1972. She was born in Miami, Florida but was also raised in Nassau, Bahamas. She is half Bahamian and and half Caucasian. She is an American actress best known for her role as Lynn Searcy on the CW show Girlfriends White is also the vocalist & lyricist for the industrial rock band XEO3.

Outside of music and television, Persia has appeared in various independent films. Her television work includes guest starring roles on Angel, NYPD Blue, Buffy the Vampire Slayer, as well as a series regular role on Breaker High.

Persia co-produced the award-winning documentary Earthlings, which was narrated by Joaquin Phoenix.

Persia who is a vegan, is also an active member of different human rights, animal rights, and environmental organizations including the Humane Society of the United States, Global Green, Farm Sanctuary, PETA, and the Sea Shepherd Conservation Society. In 2005, Persia was honored by PETA as Humanitarian of the Year. 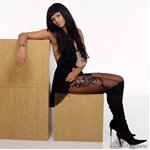