Paula Garces was born on March 20th 1974 in Medellin, Columbia. Her father was a fisherman and her mother a schoolteacher. She moved to the United States early in life and grew up in Spanish Harlem, New York. Before turning to acting she once pursued a career in kickboxing and also being a personal trainer in New York City.

Her interest in performing developed at the age of fifteen after she met her manager, Diego Santiago, her father's best friend. She has since appeared in several feature films, including Harvest with James Van Der Beek and Mary McCormack, Dangerous Minds with Michelle Pfeiffer, Life with Mikey with Michael J. Fox and the critically-acclaimed Hangin' with the Homeboys. On TV, Garces played Pilar Santos on the Emmy-winning daytime drama, The Guiding Light, in addition to small roles on the shows New York Undercover, Law and Order, Oz and in 2006 Paula became a regular cast member on FX's hit show The Shield. When she's not acting, Paula enjoys dancing and kickboxing and being with her young daughter Skye.

Paula was married to Antonio Hernandex, a butcher in New York, in 2002. The two of them have one daughter. 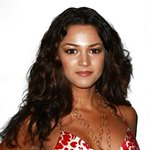