As a testament to her passion and talent, former 1950s pig-tailed moppet star Patty McCormack has remained a consistent presence on film and TV for over five decades. While the lovely and talented blond suffered her share of hard knocks in adjusting to an adult career, she did not fade away into oblivion or self destruct as those child stars before her did.

Born Patricia Ellen Russo in Brooklyn, New York, to Frank Russo, a firefighter, and the former Elizabeth McCormack, a roller skating pro, the young girl found herself modeling at age 4. Two years later she had progressed to films with bits in Two Gals and a Guy (1951) and Here Comes the Groom (1951). Soon thereafter she made her Broadway debut (at age 6) in the short-lived play "Touchstone" starring Ossie Davis.

While simultaneously appearing in the live television series "Mama" (1949) [aka "I Remember Mama"], the by-now 8-year-old returned to Broadway a second time and created the role that would make her a cult sensation -- Rhoda Penmark, the tiny, braided little demon with murderous intentions in "The Bad Seed". Starring Nancy Kelly as her put-upon, overly-trusting mother, the show became a certifiable hit. The two actors were invited to recreate their famous roles in the film version of The Bad Seed (1956) and achieved equally fine results. No child before her had ever been given such a deliberately evil, twisted role and Patty chewed up the scenery with courteous malevolence. Though the film today may come off as extremely stagy and overly-mannered to some, it's fascination cannot be denied. Audiences took readily to Patty and her wicked ways and the young actress earned both Oscar and Golden Globe "Best Supporting Actress" nominations.

It would be a hard act to follow. So strongly identified with the role, Patty found it difficult for audiences to see her any other way. She tried finding some variance as a pioneer girl in All Mine to Give (1957), a testy child star in Kathy O' (1958) and as a tomboy in The Adventures of Huckleberry Finn (1960) but the memory of Rhoda Penmark was not so easily wiped away. She suffered typical teen angst in the film The Explosive Generation (1961) with William Shatner and had to make do as a young adult in such low-level movies as The Mini-Skirt Mob (1968), Maryjane (1968) and The Young Animals (1968).

By the 70s, Patty, who had spent so much time as a child doing live television, found herself again relying on the medium for steadier work. Billed now as a more grown-up Patricia McCormack, she also appeared in a variety of legit stage productions and on occasion found roles in independent films. Appearing in more than 250 episodes of some of the most successful programs around, audiences may remember her giving sensible, wifely support to Jeffrey Tambor on "The Ropers" (1979), the short-lived spin-off of the "Three's Company" (1977) sitcom,or from her recurring role as Evelyn Michaelson on "Dallas" (1978). More recently on film and TV, she played Adrianna's mother, Liz LaCerva on HBO's hit "The Sopranos" (1999) and appeared in guest form on "NYPD Blue," "Cold Case," "Grey's Anatomy," "Entourage" and "What About Brian". She also played former "First Lady" Pat Nixon in the film Frost/Nixon (2008).

In 1995 her devoted fans reveled when she felt comfortable enough to embrace again her "Bad Seed" behavior by starring in the low budget horror feature Mommy (1995) and then its sequel Mommy's Day (1997) [aka Mommy 2]. She came full circle as a most pernicious homemaker who created violent, Rhoda-worthy ends for those unlucky enough to cross her path.

A mother herself with two children, Robert and Danielle, Patty was once married to Bob Catania, a restaurateur. She was also an eight-year companion to screenwriter and playwright Ernest Thompson of "On Golden Pond" fame. 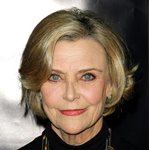