From segments on the TV Guide Channel for the Golden Globes, and the red carpet at the Catherine Zeta-Jones Benefit for the Motion Picture and Television Fund, or for E! Entertainment's Wild On!: Kentucky Derby, to the U.S. Surf Open, Proform Core Master, and Progressive Profits televised events, Patricia Kara (widely recognized as Trisha Kara) is the host for entertainment, sporting, and lifestyle events.

When this energized beauty isn't navigating us through an event, she is traveling the country shooting commercials for the likes of Coors Light, Old Navy, Bally's Fitness, Kohl's, Ericsson Mobile Phones, and even more recently in V8 and Edison Power spots. Other TV appearances include NBC's Las Vegas, All of Us, Passions, MAD TV, and Beverly Hills 90210.

Since her early years growing up in the windy city of Chicago, Patricia's career has moved her through the country from Miami, to New York, and finally to her current home in Los Angeles. Patricia's exotic and sensual look comes from her Greek heritage. She enjoys traveling back to the alluring blue waters of the Mediterranean, soaking in the sun on the islands of Santorini, Mykonos, and Zakinthos, while sharing special moments with her family and friends in the old world of Athens. Patricia's passion to explore the globe has taken her all over Europe, Australia, Canada, China, and the Caribbean. She also studied dance and theatre at Columbia College in Chicago. In the little free time she has to enjoy, Patricia basks in the beauty of Southern California's beaches, playing volleyball, rollerblading, and walking along the sandy shores. 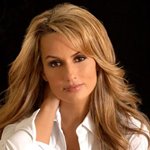