Field was born on February 12, 1942 in New York City and raised in Astoria, Queens to Greek and Armenian parents, after they immigrated there from the island of Chios in Greece.[1] She has claimed credit for inventing the modern legging for women's fashion in the 1970's. She is the owner of Patricia Field, a boutique located at 302 Bowery in Manhattan.

Field met Sarah Jessica Parker during the filming of 1995's Miami Rhapsody. The actress became so enchanted with Field's collections that they became friends and continued working with her on the series Sex and the City. Before beginning the first season of the Sex and the City television series on HBO, Parker asked to have Field design some of the clothes that her character, Carrie Bradshaw, would wear. During Field's tenure as costume designer on Sex and the City, the show became famous for the fashions showcased. For her work on Sex and the City, Field was nominated for 5 Emmy Awards, with one win, and nominated for 6 Costume Designers Guild Awards, with 4 wins. She is one out of six Honorees of the 2008 Reel Time Film Festival.

Field has been in constant demand by some high society clientele ever since, and some of her designs have become well-known. Her television credits include Hope & Faith and Ugly Betty. She served as costume designer for the feature film The Devil Wears Prada, for which she was nominated for an Oscar for Best Costume Design, although in an extensive interview included as a bonus feature on the film's DVD release, she admits she dressed the cast by gathering garments from other designers' ready-to-wear collections rather than creating them herself.

Field, who is openly lesbian[2] was for many years romantically committed to costume designer Rebecca Weinberg (Field),[3] with whom she has partnered on Sex & the City and Spin City.

Field also appeared as the first guest judge during the first season of the Bravo reality television series Project Runway.

Field has been seen in the USA and Athens with Greek superstar Anna Vissi, whom she is good friends with. Vissi went to the Oscars with Field in 2006.

Patricia Field boutique was featured in a 2007 episode of Kathy Griffin's reality show My Life on the D-List, as well as on a 2008 episode of Paris Hilton's My New BFF.

She is currently working on Ugly Betty as Costume Designer. 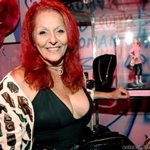