Paola Cortellesi was born on November 24, 1973 in Rome, Italy. She is a famous actress and a writer. She sang an Italian hit song when she was only 13 years old.
Paola started her career as an actress with the famous movie "Chiedimi se sono felice" in which she played the role of Dolia in 2000. 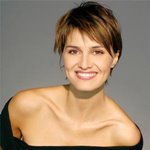