Paige Howard is an American theater, television and film actress. She is a sister of actress Bryce Dallas Howard and daughter of director Ron Howard. Paige Howard made her professional stage debut at the Vineyard Theatre in New York City, in J.M. Barrie's play, "Mary Rose", playing the title character, directed by Tina Landau.

After guest-starring roles on TV shows Medium and 90210, Paige made her feature film debut as Sue O’Malley in the 2009 comedy Adventureland, which opened to critical praise. She then followed with a lead role on the web series stalkTALK, and starring roles in the indie comedies Virgin Alexander and Cheesecake Casserole, as well as the psychological thriller The Employer opposite Malcolm McDowell. She is in development on several films and continues to look at a variety of projects. On May 25, 2013, Paige won Best Supporting Actress at the Los Angeles Movie Awards for her role in The Employer. 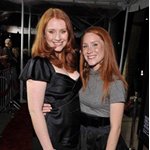