Born into a showbiz family, Omar Gooding followed in his actor brother's footsteps and began acting at age 14 in early 1990. After landing his earliest jobs in commercials and industrial films, the aspiring actor started out as a co-host for Nickelodeon's game show "Wild & Crazy Kids" (1990-1992), which won him a Young Artist Award for Outstanding Hosts for a Youth Magazine, News or Game Show in 1992. He would later be nominated for the same category again at the same ceremony in the following year.

Meanwhile, Gooding was spotted as a guest in an episode of the ABC sitcom "Just the Ten of Us" and made his film acting debut in "Ghost Dad" (1990), a critically eviscerated comedy film directed by Sidney Poitier and starring Bill Cosby. For his portrayal as Stuart, Gooding nabbed a Young Artist Award nomination for Best Young Actor Supporting Role in a Motion Picture.

From 1991 to 1992, Gooding had a recurring role as Brad on the NBC sitcom starring Mayim Bialik, "Blossom." And after "Wild & Crazy Kids" came to end in 1992, he landed a role on the ABC sitcom starring Mark Curry and Holly Robinson, "Hangin' With Mr. Cooper," playing Earvin Rodman. Originally cast as a recurring, he was eventually picked as regular and stayed in the show for five years (1992-1997). For his work in the show, Gooding received two Young Artist Award nominations, both for Best Youth Actor Recurring or Regular in a TV Series (1993 and 1994).

During this time, Gooding played the recurring role of Art in the short-lived CBS sitcom "The Royal Family," starring Redd Foxx and Della Reese, and guest-starred in an episode of the short-lived ABC sitcom starring Thea Vidale, "Thea." He also appeared in the dramatic made-for-television movie starring Morris Chestnut, "The Ernest Green Story" (1993).

After his contract with "Hangin' with Mr. Cooper" ended in 1997, Gooding went on to co-star in the WB sitcom "Smart Guy," playing Morris L. 'Mo' Tibbs (1997-1999), Marcus and T.J.'s (played by Jason Weaver and Tahj Mowry respectively) muscular, sometimes dimwitted and gullible, but lovable best friend. He then provided his voice in several episodes of the WB animated TV series "Batman Beyond" and played Doug Anderson (2000), the foursome's (played by Selma Blair, David Moscow, Michael Rosenbaum, and Azura Skye) friend, in the WB teen sitcom "Zoe, Duncan, Jack and Jane."

Meanwhile, Gooding could be seen sharing the screen with Danny Glover in the Emmy-nominated TV movie "Freedom Song" (2000) as well as guest starred in an episode of Kids' WB animated series "Static Shock" and the CBS drama "Touched by an Angel." He also had a significant supporting turn in the feature film written, produced, and directed by John Singleton, "Baby Boy" (2001). Portraying Sweetpea, the buddy of an unemployed, selfish, and immature young man (played by Tyrese Gibson) who still lives with his mother, Gooding received applause and was awarded “Special Mention” at the Locarno International Film Festival.

Gooding the played two recurring roles, as Malik, a barber at Phatheadz, during seasons 2 and 3 (2002-2003) of UPN sitcom "One on One," and as Dom Cabrillo (2002) in Lifetime's cop/crime drama "The Division." He also teamed up with CeCe Cline and Bobby Waddington, playing homeless youth currently living on the street after running away from their parents' abusive homes, in writer/director small dramatic film called "Verbal Communications" (2002).

In the following year, Gooding starred as the brash, young running back star "Demetrius Harris" (aka "DH), in the ESPN football series, "Playmakers," which ran eleven episodes from August 26, 2003 to November 11, 2003. Two years later, in 2005, he played the lead in the Showtime sitcom based upon the Mark Brown-created characters in the 2002 popular movie of the same name, "Barbershop." Portraying Calvin Palmer, Jr., the proprietor of an African American barbershop on the south side of Chicago, Gooding later earned an Image Award nomination for Outstanding Actor in a Comedy Series.

During that time, he co-starred in the made-for-television movie adapted from Jules Verne's novel, "Mysterious Island" (2005; with Kyle MacLachlan and Patrick Stewart), and supported Boris Kodjoe in writer/director Rob Hardy's musical drama feature, "The Gospel" (2005).

He also starred as an egocentric airbrush artist who runs a lingerie shop in Alton Glass' comedy movie "The Candy Shop" (2006) and was spotted as a guest in an episode of the UPN sitcom starring the female rapper, "Eve," and the CBS cop/crime drama "CSI: Miami," as well as in two episodes of the HBO western-drama "Deadwood," in which he played Odell Marchbanks, aunt Lou's (played by Cleo King) son that worked as a cook for George Hearst (played by Gerald McRaney).

In 2007, Gooding could be seen in the straight-to-video released urban romantic comedy movie "Lord Help Us," starring Nadia Turner and Joe Clair. He is currently working on his upcoming film projects, "Bolden!," a drama by Dan Pritzker starring Anthony Mackie, and "Knuckle Draggers," a romantic comedy by Alex Ranarivelo starring Ross McCall and Paul J. Alessi.

Besides acting, Gooding also inherited his musician father's talent. He has a musical group called “Omar Gooding and Legion,” that has recorded their first single, “Mamacitas,” under Thump Records. 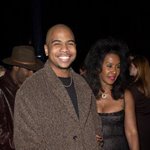