Nicolas Kiefer (born 5 July 1977 in Holzminden), is a tennis player from Germany. His mother, Nicole, is French. He won a silver medal in men's doubles with partner Rainer Schüttler at the 2004 Summer Olympics in Athens. Kiefer was taken notice of as an outstanding junior. He won the Junior Australian Open, US Open and was a finalist and semi-finalist at Wimbledon and the French Open finishing as the number 2 junior behind Zabaleta when he was 18. On 10 January 2000 he reached his second quarterfinal at the Australian Open and afterwards was ranked World No. 4, his highest position to date. Nicolas has been known to have a few tennis superstitions. He is sometimes seen tapping his racquet on the corners of the court after a point,[1] although the reasons behind this are not clear. He also, when serving, frequently asks for the ball with which he has just won a point to re-use it in the next one.Kiefer became infamous for an incident on 25 January 2006, during the quarter finals of the Australian Open. While facing Sébastien Grosjean late in the fifth set of a marathon match, Kiefer threw his racquet mid-point. Grosjean lost the point, hitting the ball into the net. Grosjean protested that the racquet distracted his shot. The umpire Carlos Bernades said he did not believe the act was intentional and noted Grosjean had already hit the ball before the flying racquet could have had any effect on his shot. Grosjean eventually lost the fifth and final set toKiefer. Kiefer went through to the semi-finals where he was defeated by the 2004 champion Roger Federer. Kiefer injured his wrist while playing at the 2006 French Open , and announced his return on 5 July 2007, having fallen to the 404th position on ATP. He announced that he was \"tired of waiting and anxious to start traveling again and to see his name on scoreboards\".Kiefer returned at the 2007 Gerry Weber Open, losing in the first round to eventual champion Tomáš Berdych. At Wimbledon, he made the third round after defeating #30 seed Filippo Volandri and Fabrice Santoro, both in straight sets, before losing in 4 sets (3 of which were tiebreakers) to Novak Đoković. At Newport, however, he ended up losing in round 1. At Los Angeles, he reached the semifinals in only his 4th tournament since coming back from injury; he had to default against Radek Štěpánek, another player coming back from injury, because of an injury sustained during his quarterfinal win. He also made an impressive showing at the 2007 Madrid Masters, where he beat number five seed Fernando González in the quarterfinals before losing in the semifinals to world number one Roger Federer 6–4, 6–4. After the tournament,Kiefer 's ranking will be around 62, moving up about fifty positions from 112. The start to his 2008 season did not start out well, losing in the first round of theAustralian Open to former world #1 Juan Carlos Ferrero, first round of 2008 Indian Wells Masters to Dudi Sela, third round of 2008 Miami Masters to world #2 Rafael Nadal, second round of 2008 Monte Carlo Masters to Philipp Kohlschreiber, first round of 2008 Rome Masters to Ferrero. His first notable result was the quarterfinals of the 2008 Hamburg Masters with victories over world #10 Stanislas Wawrinka and world #4 Nikolay Davydenko before losing to Andreas Seppi in three sets. He would lose in the third round of 2008 Wimbledon Championships to Nadal. During the 2008 Canada Masters, at age 31 and ranked #37, he made his first Masters final after 73 previous tries, previously finishing as a semifinalist at the 1999 and 2004 Canada Masters (lost to Thomas Johansson and Andy Roddick respectively) and 2007 Madrid Masters (lost to Federer). Along the way, he defeated Mardy Fish 7–5 7–6(4), #15 seed Mikhail Youzhny 7–6(4) 7–5, #4 seed Nikolay Davydenko 4–6 6–4 6–4, #7 seed James Blake 6–1 6–2, and Gilles Simon 6–7(4) 6–3 7–6(5) - the win over Simon was especially notable because Simon had defeated world #1 Roger Federer in the second round. He lost to Nadal in the final 6–3, 6–2. Because of his run, he broke back into the top 20 at #19. 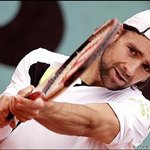