Nichelle Nichols (born December 28, 1932 in Robbins, Illinois) is an American singer and actor. She sang with Duke Ellington and Lionel Hampton before turning to acting. Her most famous role was playing the communications officer Uhura on the USS Enterprise in Star Trek.

She was the first African American woman featured in a major television series. In the first year of the series, Nichols was tempted to leave the series as she felt that her role lacked significance, but Dr. Martin Luther King, Jr. personally encouraged her to stay on, telling her that he was a fan and that she was a role model for black children. Dr. Mae Jemison has cited Uhura as her inspiration for wanting to become an astronaut and Whoopi Goldberg has also spoken of Uhura's influence.

In her role as Uhura, she participated in the first interracial kiss on US television, with William Shatner (Captain James T. Kirk) in the 1968 Star Trek episode "Plato's Stepchildren." This provoked protest and was seen as groundbreaking, even though the kiss was portrayed as having been forced by alien mind control. The episode was not screened in some Southern states as a result of the protests in those states; nevertheless, it had caused many viewers to contact the broadcaster and the majority of the feedback of the incident was positive. It was over twenty-five years before it was broadcast on British television.

After the series, Nichols volunteered her time in a special project with NASA to recruit minority and female personnel for the organization, which proved to be a spectacular success. They include Guion Bluford and Sally Ride, and also Judith Resnik and Ronald McNair, who were both killed in the 1986 Challenger Accident. In 1995, she published her autobiography Beyond Uhura: Star Trek and Other Memories.

Between the end of the original series and the Star Trek films, Nichols starred in minor roles in film and TV. She portrayed a foul-mouthed madam in Truck Turner(1974) opposite Isaac Hayes. She appeared as one of Al Gore's Vice Presidential Action Rangers in an episode of the animated series Futurama. 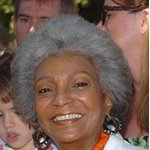 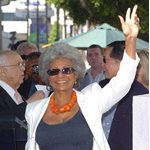