Over the past year, in the Hollywood trend of teen oriented television and films, Nathan West has created an impressive career for himself. West is very excited to star in his second Universal Film, Skulls 2, in which he plays 'Parker Neal', a good looking, strong and charismatic guy with upper class qualities. Teen movie producer icon, Neal Moritz is producing with Joe Chappelle directing.

He most recently starred opposite Kirsten Dunst in the Universal hit film, Bring It On directed by Peyton Reed. He played 'Jan' an athletic, womanizing member of a high school cheerleading squad.

Born in Anchorage, Alaska, West excelled in his hometown's favorite pastime, hockey, and was a sure thing for the NHL draft. He was also locally cast as one of the Icelandic hockey opponents in Disney's The Mighty Ducks. He decided to pursue his new found passion of acting and passed up the NHL to move to Los Angeles in pursuit of his new dream.

Nathan's first year has been a very successful one and indicates that he is a young actor that you will continue to see far into the future. 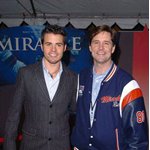